Research is active on the technology titled, "A Method of Generating O2-rich Gas from Air Using Water." This technology is available for licensing and/or further collaborative research from the U.S. Department of Energy’s National Energy Technology Laboratory.

Gas enrichment is often required in industrial operations to enhance efficiency but current techniques can be costly. Integrated gasification combined cycle (IGCC) technologies, for instance, are capable of generating power with high efficiency by producing heat and synthesis gas (H2 and CO) using Oxygen (O2)-rich gas, water, and carbon feedstock. While the water and carbon feedstock can be acquired by traditional means, the O2-rich gas requires significant expenditures of energy to produce, which lowers the overall gasification process efficiency.

This invention describes a simple and cost-effective method of obtaining O2-rich gas by dissolving air into water, which acts as an oxygen-carrying medium. Air (approximately 78 percent by volume of nitrogen and 21 percent by volume of oxygen) is continually injected into water and released in a unique configuration, causing the concentration of O2 to become enriched with each cycle. These cycles take place in sub-units that each house two chambers which recycle the water between themselves. This process is repeated through a total of six sub-units until the O2 composition reaches 96 percent—on par with the more energy-intensive cryogenic technology that generates 95 percent purity oxygen.

If a higher percent purity of oxygen is required, two more sub-units can be added to the process to generate 99 volume percent O2 purity. Each sub-unit requires the same amount of energy to operate, so total energy cost is expected to be proportional to the required O2 purity.

The successful integration of this method into industrial processes would reduce the energy, environmental burden, and cost required to produce O2-rich gas, which would increase overall efficiency of industrial operations such as IGCC. 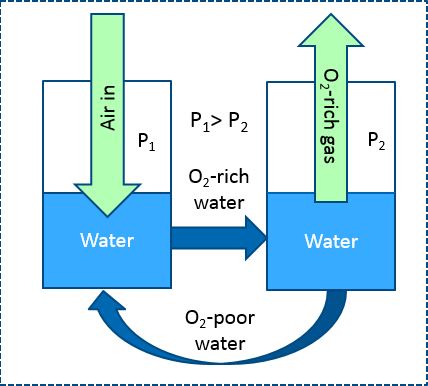