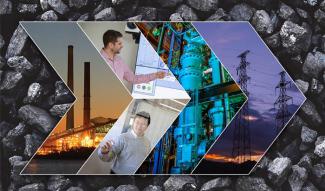 The need for improvement drives innovation, and the work of NETL’s Process Systems Engineering (PSE) Research team is a significant example of how that adage meets reality. The team is keenly focused on optimizing today’s fossil-fuel-based power plants while planning for tomorrow’s complex energy markets - efforts that could usher in new jobs and lower the cost of electricity. NETL has already received international attention for its development and use of advanced PSE models and computational tools to support decision-making and analysis, and those capabilities continue to grow.

Researchers at the Lab are not only working on ways to increase coal-fired plant efficiencies and reliability through system-wide optimization, but they are also looking to the future by accelerating the development of the most promising new advanced energy systems like chemical looping combustion, supercritical CO2 power cycles, and transformational carbon capture technologies.
“Fossil fuel power plants provide stability and reliability to the U.S. power grid,” explained Tony Burgard, NETL’s Process Systems Engineering Research team lead. “So, improving our existing coal-fired fleet is a top priority right now.”

In an earlier effort, NETL’s PSE team led the development of a suite of state-of-the-art computational modeling and simulation tools through the Carbon Capture Simulation Initiative (CCSI), which was a partnership among national laboratories, industry and academic institutions. Since CCSI’s first toolset was released in 2012, the initiative met and exceeded goals, earning an R&D 100 Award – an "Oscar of Innovation" – as one of the top 100 technology products of 2016. This critical work is being extended by the Carbon Capture Simulation for Industry Impact (CCSI2) project, which is using the CCSI Toolset to support the scale up of second-generation capture technologies and the development of new transformational carbon capture systems through partnerships with technology developers.

“The CCSI Toolset is the only suite of computational tools and models specifically tailored to help maximize learning and reduce risk during the scale-up process for carbon-capture technologies,” explained David Miller, senior fellow for Process Systems Engineering at NETL. “This is critically important because carbon-capture pilot projects represent an expensive, limited opportunity to collect the data necessary to move to commercial scale.”

Building on the successes of CCSI, NETL’s next step in computational analysis was creation of the Institute for the Design of Advanced Energy Systems (IDAES) in 2016 to enable advanced design, investment, and operation support for the entire U.S. electric power generation system. Specifically, IDAES is creating computational systems to enable the optimal design of individual components and complete power plants, to rapidly assess retirement or refurbishment options of aging fossil energy generators, to ensure their optimum performance over their full range of operating conditions, and to identify preferred plant performance characteristics of existing or new facilities that maximize overall grid performance.

“To accomplish this, IDAES is developing entirely new PSE capabilities to support design and optimization that transcend the limitations of current approaches,” Miller said.

For example, engineers typically rely on commercial simulation packages to synthesize and model process flowsheets, but these existing tools suffer critical limitations that prohibit large-scale process optimization. With IDAES, researchers are building an open-source PSE framework that is specifically designed for optimization from the ground up.

“Optimization enables us to pinpoint the best possible designs after considering thousands of decision variables, design constraints, and economic and environmental objectives all at once. It is much more rigorous than merely finding an improvement to a system by changing a handful of decision variables that seem important.” said Burgard.

Because of recent advances in modeling techniques, solution algorithms, and computing power, a new era is dawning in which researchers at NETL can provide industry with design and decision analysis capabilities that enable significant savings through better choices in investments and operations. Optimizations that were previously limited to systems with relatively low complexity can now be done over vastly more complex systems in reasonable amounts of time.

“The result is the ability to assess more alternatives more quickly while incorporating the entire power system into the evaluation,” Miller explained.

Building on the success of CCSI, NETL’s PSE capabilities are continuing to evolve with IDAES to provide valuable analysis for energy markets that will become more and more intricate. Today, the large-scale optimization of complex, innovative processes spanning conceptual design and process synthesis to dynamic optimization is now possible. The addition of such capabilities will ensure that Americans continue to receive affordable and reliable energy.