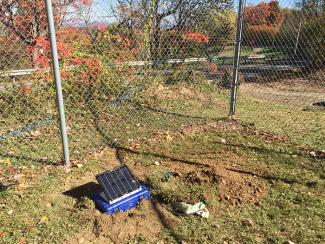 When researchers from the Department of Energy’s (DOE) National Energy Technology Laboratory (NETL) set up new monitoring capabilities at active Marcellus Shale hydraulic fracturing sites in Pennsylvania and West Virginia to better understand seismic activity, they discovered that low frequency tremors occur, which they believe could be useful to optimize oil and natural gas production from unconventional shale.

Abhash Kumar, a contractor at NETL who developed the new surface seismic monitoring capability along with Erich Zorn, an intern with NETL in the Oak Ridge Institute for Science and Education (ORISE), explained that hydraulic fracturing has revolutionized the Nation’s energy security requirements as well as hydrocarbon production capabilities.

“It’s a well-established exploration technique to stimulate production of oil and natural gas from unconventional formations such as shale and tight gas sands, commonly referred as ‘tight oil’,” he said. “The injection of water or other fluids during hydraulic fracturing helps enhance permeability of the reservoir rock, increasing the rate of flow of the hydrocarbons. Surface seismic monitoring of hydraulic fracturing is an important tool to evaluate the effectiveness of reservoir stimulation.”

Kumar and Zorn, mentored by NETL researcher Richard Hammack and Professor William Harbert of the University of Pittsburgh, collected seismic data that indicated the presence of low frequency seismic emissions during hydraulic fracturing.

“Our analyses confirmed seismic events lasting between 30 to 60 seconds in duration with significant concentration of energy at lower frequencies.” Kumar said.  “During various stages of hydraulic fracturing, long period events were found to occur most frequently when the pumping pressure and slurry rate were at maximum levels. That suggests that they may play a significant role in the reservoir stimulation.”

Abhash Kumar said that the observation of low frequency earthquakes during hydraulic fracturing can be useful for optimizing oil and natural gas production from unconventional shale. He added that information about reservoir stress states and distribution of natural fractures linked to low frequency earthquakes can be used to plan reservoir stimulation in a manner that is both optimally efficient and most productive as a long-term energy resource.

The NETL researchers said they believe that, in combination with advancements in hydraulic fracturing techniques and directional drilling, the surface seismic observations may serve as an additional platform to support efficient, oil and natural gas recovery, further supporting productivity in the “Shale Revolution.”