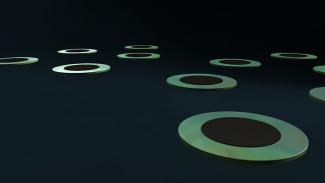 In the 1960s, when humans were taking their first grand leaps into outer space, NASA needed a clean reliable way to supply electricity to its spacecraft. The answer to the problem was fuel cell technology. NASA’s manned space flights marked the first commercial use of the fuel cell, and they have been providing electrical power for space missions—and more down-to-earth applications—for more than 40 years.
So, what’s so great about a fuel cell? Unlike renewable energy sources like solar or wind, fuel cells can run in any environment quietly and efficiently. They have near-zero emissions, and, unlike batteries, which are simply energy storage devices, fuel cells can run continuously as long as fuel is provided. In certain configurations, fuel cells can even run in reverse, generating hydrogen that can then be used as fuel for continuous operation.

NETL research focuses on solid oxide fuel cells (SOFCs), which are particularly low pollution and high efficiency, with an eye toward coal-based utility -scale electrical power generation. Compared to today’s fossil energy combustion technologies, SOFCs produce less CO2, require less water consumption, and use less fuel while providing the same amount of electricity. They can operate on a variety of abundant domestic fuels—like hydrogen, coal synthesis gas, and natural gas. These advantages make SOFCs a nearly perfect clean energy technology—nearly perfect because a few challenges must be overcome before SOFCs are ready for the commercial market. NETL research is forging a clear path to launch this space-age technology into today’s commercial market.

SOFCs produce power by converting the chemical energy in fuel directly to electrical energy. SOFCs consist of two electrodes—a positive cathode and a negative anode—and an electrolyte sandwiched in between. The chemical reactions that produce electricity occur at the active region where the electrolyte and anode interface, while the electrolyte shuttles the necessary charged particles from the cathode to the anode. A catalyst can be used to speed up the reactions at the electrodes.

SOFCs operate at high-temperature, which increases their efficiency and also allows them to use hydrogen and carbon monoxide that is produced through coal gasification as well as during reforming of hydrocarbons such as methane.

They have no moving parts, which enables them to be highly efficient. When incorporated into power generation systems, SOFCs could more than double efficiency, meaning they provide more power from less fuel, which could translate into lower energy prices for consumers. Today’s state-of-the-art pulverized coal power plants operate at 32.5 percent efficiency (with 90 percent carbon capture). By contrast, an integrated gasification fuel cell system has an efficiency of 42.6 percent, and this number is projected to increase to 54.1 percent when research and development (R&D) goals are met. In a natural gas-based system, efficiency jumps to nearly 70 percent—that’s twice the energy from half the fuel, producing less CO2, using less water, and resulting in more electricity per pound of coal, offering consumers more energy for less.

Launching into the Commercial Market

So what keeps fuel cells from being competitive on the commercial market currently? The high temperature (700–1000 degrees Celsius) that enables their high efficiency also requires expensive components and supporting systems. SOFCs are also sensitive to their environments and can be “poisoned” by metals or other surrounding components. This poisoning effect causes the SOFC to lose reactivity and, therefore, become less efficient. Reliability in general is an area of concern because SOFCs suffer from degradation, or a continuous loss of performance over time, which limits the cell’s lifespan.

NETL is employing a complementary research effort that analyzes technology potential and establishes program goals based on key technology areas that stand to make the biggest impact on market competiveness. Systems engineering and analysis examines best-case scenarios to determine what research should be pursued for SOFC technology to be cost-competitive with other power production technologies.

Working with industry partners, NETL’s analysis team identified certain performance improvements that must be made to enable SOFC-based power plants. In particular, reducing cell degradation has been identified as a key need that will result in the largest economic gain. To better understand degradation, NETL researchers are developing a comprehensive modeling tool to understand how an SOFC’s structure correlates to its function and how this structure evolves during hours of operation. They are also developing innovations to increase the durability of SOFCs so that they work better, longer. One example is NETL’s patented single-step electrode infiltration technique that has been proven to double the lifetime of state-of-the-art SOFC technology, using a cost-effective advanced manufacturing approach.

NETL’s SOFC Program goals seek to reduce SOFC stack and system costs, increase operating lifetime, and reduce performance degradation—efforts that will ultimately result in decreased system costs. Specifically, DOE is targeting a cost of $225/kW for the stack and $900/kW for an SOFC system; lifetime of at least 4.5 years, and degradation reduced to 0.2% per 1,000 hours.

R&D for a Better Energy Future

NETL’s breakthrough R&D is resulting in innovations to improve performance in the anode and cathode, increase cell efficiency, and diminish SOFC system costs, all with the goal of transferring these breakthrough innovations to industry and facilitating commercial acceptance of SOFC technology.