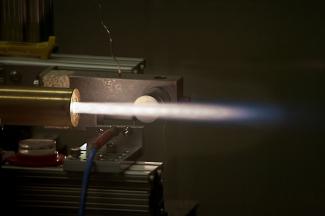 THE POWER OF PLASMA: HIGHER EFFICIENCY WITHOUT MOVING PARTS

Inside a new NETL laboratory, researchers are firing up a device that may one day enable unprecedented power generation performance without any moving parts. Jetting out of the nozzle of a high-velocity oxyfuel torch, a stream of plasma glows like a light-saber poised for combat. But this technology is designed to battle the low efficiencies that plague many of today’s energy conversion systems, rather than galactic evil-doers.

The torch will become part of a generator that makes use of magnetohydrodynamics (MHD)—the forces and properties of electrically conductive fluids, such as plasmas, in a magnetic field. The MHD generator will harness this plasma stream, which is created by mixing and combusting a powdered additive with a fuel source—currently kerosene, but industrial-scale systems would likely use coal or natural gas. In the generator, a powerful magnet induces electrical current in the plasma stream, and electrodes harness the resulting power.

MHD generators can be operated at very high temperatures, which means they can be highly efficient. The high-temperature capability of MHD generators is particularly synergistic with the oxy-fuel approach to carbon capture, which uses pure oxygen, rather than air, to burn fuel. As a result, oxy-fuel exhaust consists almost exclusively of water and CO2, enabling easy removal of water and leaving a near pure CO2 stream for capture.

The MHD generator is an example of direct power extraction, a technology concept that converts the thermal or kinetic energy in a fluid, such as the gas stream in a power plant, directly into useable electrical power. By avoiding an intermediate mechanical energy conversion step, such as the movement of turbine blades, direct power extraction can achieve power generation efficiencies beyond what is currently possible.

Researchers in  NETL’s  MHD Laboratory are safely conducting experiments that validate developed simulation tools, test materials in realistic service conditions, and test for proof of concept in photoionization—a new way to better seed combustion plasma. These activities are enabling future MHD engineering applications that can provide the nation with a more efficient and environmentally friendly way of burning fossil fuels.