LG Fuel Cell Systems (LGFCS) will focus on the evolution of the LGFCS stack (integrated planar segmented-in-series solid oxide fuel cells (SOFCs) at pressures up to seven atmospheres) and block technology to include in-stack reforming. In addition, this project will address further design optimization of dense ceramic parts, ceramic/glasses and the porous substrates. All the stack design improvements are aimed at being better suited to a more automated manufacturing and assembly operation with improved yields. LGFCS will validate new strip designs that enable incorporation of maximum levels of in-stack reforming and redesigned ceramic components and substrates that can be produced in volume at lower cost and which further improve fuel flow distribution throughout the stack. Extensive multi-physics-based modeling will be performed and validated to probe the thermal stress state imposed on the ceramic strip components over the range of stack designs and operating parameters to insure that structural reliability of the ceramic structure is not compromised by the inclusion and extent of in-stack reforming selected for the product. In-stack reforming will be initially validated within the single-block pressurized test rigs that replicate the product cycle and conditions. A follow-on test in a triple-block rig will also be conducted. This project will also include full system testing for a planned 22 week test schedule of all the subsystems of the LGFCS megawatt-scale product. This project will use active layers developed in a previous LGFCS DOE contract, DE-FE0012077, having lower ASR and improved durability to construct strip components for use in the triple-block test with in-stack reforming. Improved seals with adjusted thermal expansions will be utilized. 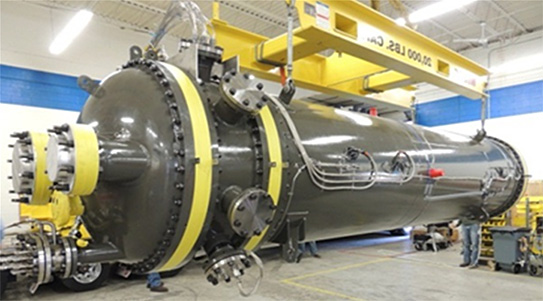 LGFCS will confirm key operational parameters for the integrated power system. The work will also demonstrate system robustness and reliability, which are critical steps in the pathway to deploying SOFC systems in the field. This LGFCS project is an evolution of the LGFCS stack and block technology to include in-stack reforming at levels that will provide for significant cost reductions through simplification of balance of plant components, consolidation of stacks across fewer generator modules and the associated turbo-generators, and favorable block thermal conditions to limit peak temperatures and degradation of the fuel cells.