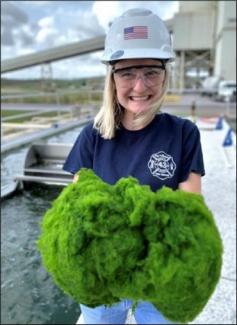 Working as part of a three-year cooperative agreement with DOE-NETL, researchers have demonstrated that algae grown using carbon dioxide (CO2) emitted by a fossil energy power plant can be processed into a nutrient-rich supplement for chicken feed to produce quality eggs and poultry products.

Supported with nearly $1.7 million in Federal funding, the project, Beneficial Reuse of CO2 from Coal-Fired Power Plants for Production of Animal Feeds, was launched at the Stanton Energy Center, an electric generating station in Orlando, Florida.

Like trees and other vegetation, algae require sunlight and CO2 to grow. Microalgae were grown in shallow ponds, which allowed light to penetrate the water. Flue gas, which contains concentrated CO2, was captured via slipstream from the power plant and pumped into raceway ponds built at the generating station.

Project partners included the Orlando Utilities Commission, MicroBio Engineering Inc. and the University of Central Florida. With NETL project oversight and support, they found that growing algae using flue gas was more productive and resulted in greater amounts of algae compared to using a pure CO2 stream or ambient air.

“The finding is significant because it could provide an incentive for power plants and other industries to sell large quantities of CO2 to grow algae-based feed additives, which would offset some of their costs to capture and sequester carbon,” said Isaac “Andy” Aurelio, project manager and a member of NETL’s CO2 Removal and Conversion Team.

After it was dried and milled, the algae supplement was blended with chicken feed. Another project partner, California Polytechnic State University, then began a series of trials and tests. They discovered that the algae supplement had 30% greater energy content than conventional feed and contained omega-3 fatty acids and other nutrients. Eggs from hens that are fed omega-3 enriched feeds tend to be much higher in omega-3 fatty acids, which are known to reduce blood levels of triglycerides, a well-known risk factor for heart disease.

“The whole focus was, ‘Can we make a better chicken feed with an algae supplement that we can grow using captured carbon dioxide in the flue gas from a power plant. The answer is, ‘Yes, we can,’” Aurelio said.

A broiler meat production trial is underway at Cal Poly. Its purpose is to determine the benefits of the feed supplement on skin color, meat quality, cooking yield and tenderness. Journal articles are planned to publish results.

Researchers also noted a 1,000-acre microalgae farm would utilize about 1% of the Stanton Energy Center’s CO2 emissions. “But the findings do provide another tool, in addition to carbon capture and geologic storage and other strategies, to meet the DOE’s goals for net-zero carbon emissions in the power sector by 2035 and the broader economy by 2050,” Aurelio said.