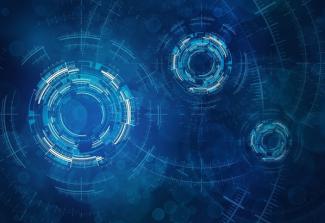 Through a collaboration with one of the world’s leading artificial intelligence (AI) hardware manufacturers, NETL is developing a cutting-edge computer modeling capability using next-generation computer architecture that is much smaller, more energy-efficient, and hundreds of times faster than current supercomputers.

“We proposed that the same properties that made the WSE excellent for AI work could be leveraged for computer modeling of energy systems here at the Lab,” Van Essendelft said. “We used the original CS-1 system, which features the WSE, to successfully perform a key computational fluid dynamics workload more than 200 times faster and at a fraction of the power consumption than the same workload on the Lab’s supercomputer JOULE 2.0. This opened the door to the development of a valuable capability at NETL to blend AI capabilities with complex energy modeling.”

Since that initial breakthrough, Van Essendelft and his team have been working on new research to harness the power of this computational tool. Specifically, they have been developing a capability to use the WSE to solve what are known as field equations. Solving these equations is critical to the understanding of electrodynamics, geomechanics, computational fluid dynamics and structural mechanics, among others, which are crucial to designing decarbonization technologies. This technology will have a major impact on the pace of development and deployment of carbon neutral technologies to meet the ambitious decarbonization targets set by the Biden Administration.

“In this initial work, we are investigating a simple thermal diffusion equation,” Van Essendelft said. “This is the simplest field equation in computational fluid dynamics, but this is the first step to building a complex capability. Most importantly, we showed that we can solve general-purpose engineering problems on this hardware many hundreds of times faster than what is possible on traditional computing hardware. This is a world first and an exceptionally important milestone in computational science, as it represents a completely new way of practical computing. Furthermore, all the pieces are in place to do more complex and meaningful problems. It will not be long until we are solving complex fluid problems. The programming interface we developed has a very simple user interface, which lowers the barrier to entry on this hardware and provides both programming flexibility and extremely high performance.”

The latest generation WSE has approximately 850,000 cores laid out in a 2D array. Each core functions like a fully programmable node on a supercomputer — with its own memory, processor and router. Everything is miniaturized to fit within a few hundred microns and is connected via nanowires. The small scales are exceptionally important as they maximize data transfer speeds and minimize energy consumed per bit of data moved or computed, maximizing utilization. For example, typical utilization of supercomputers are below 0.5% for field equation modeling, while WSE utilization can be higher than 30%, which allows practitioners to do more useful work with the same raw computing horsepower.

“HPC systems will need to solve mathematical and scientific problems and do AI equally well, at the maximum possible pace. The future of computing is not isolated scientific modeling or purely AI but a hybrid of both,” Van Essendelft said. “The Cerebras system is designed for AI, and we want to prove we can use it for scientific modeling, AI training and inference, and hybrid workflows.”

This accomplishment is aligned with NETL’s Science-based Artificial Intelligence and Machine Learning Institute (SAMI), which combines the strengths of NETL’s energy computational scientists, data scientists, and subject matter experts with strategic partners to drive innovation and deliver solutions to today’s energy challenges. In this instance, Van Essendelft and his team engaged one of the world’s leading AI hardware manufacturers to solve traditional problems, which could lead to further successes in solving NETL’s AI and HPC challenges as well.