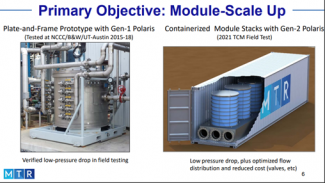 When NETL recently gave the green light for a private sector partner to build a large pilot scale field test of a technology that can effectively capture more greenhouse gases without using hazardous chemicals at a reduced cost, it represented the latest chapter in a technology development story that has been a dozen years in the making.

Membrane Technology and Research Inc. (MTR) is a world leader in the development and production of membrane-based separation systems for the petrochemical, natural gas, and refining industries. MTR researchers have had a long working relationship with NETL experts on ideas and support to develop a cost-effective CO2 capture process that uses a new class of membrane material known as Polaris™.

Membranes are thin layers of materials that are permeable to the molecules they are meant to capture, such as water, CO2 or oxygen.

CO2 capture from industrial facilities, including those associated with mineral production like cement and lime; chemical production plants that produce ammonia, and petrochemicals; iron and steel production; and pulp and paper production, is critical to achieving the goals of the Administration — net-zero carbon emissions in the power sector by 2035 and the broader economy by 2050.

The latest technology scale-up milestone in the process was the selection of the Polaris technology for a 10 MWe large pilot scale field test at the Wyoming Integrated Test Center in Gillette, Wyoming. The project will include the construction, installation, and operation of a large pilot system.

But that technology development milestone, the result of 11,500 hours of field testing, had its origins more than a decade ago.

With early support from NETL, MTR advanced its membrane CO2 capture technology through laboratory, and bench-scale testing. That work led to sensitivity studies that showed the membrane capture approach is even more attractive when the flue gas has higher CO2 content like at cement plants and other industrial sources.

With continuing NETL support and input, the technology development process progressed to tests at the Department of Energy’s National Carbon Capture Center from 2010 to 2015. As a carbon capture research and test facility for NETL, the National Carbon Capture Center has provided more than 125,000 hours of real-world testing for approximately 70 advanced technologies, reducing the projected cost of carbon capture for fossil-based power plants by approximately 40%.

For the MTR project, a 20 tonnes-per-day small pilot-scale system was successfully installed, commissioned and operated on flue gas for more than 1,400 hours, providing MTR with valuable insights to continue technology development and scale-up.

The next step in the NETL/MTR technology development saga was a test of second-generation membranes and modules at the Technology Centre Mongstad (TCM) in Norway — the world’s largest and most flexible test center for developing CO2 capture technologies. Testing there uncovered additional carbon capture potential by using multiple membrane stacks. The TCM tests will continue to run through the summer of 2022.

On a concurrent path, the MTR membrane technology project became the focus of another NETL supported testing partnership with CEMEX Balcones in New Braunfels, Texas, where initial engineering design and constructability reviews were pursued to determine feasibility of using the membrane capture technology at a cement plant. Cement production generates large volumes of CO2 at a higher CO2 concentration.

The 18-month CEMEX project, set for completion in March 2022, is estimating the cost and performance of installing a full-scale Polaris membrane CO2 capture system at the New Braunfels plant. Other project deliverables include preliminary engineering drawings, a construction schedule and construction estimates.

Development of the promising technology is a clear demonstration of NETL’s mission to drive innovation and deliver technological solutions for an environmentally sustainable and prosperous energy future. By leveraging its world-class talent and research facilities, NETL is ensuring affordable, abundant and reliable energy that drives a robust economy and national security, while developing technologies to manage carbon across the full life cycle, enabling environmental sustainability for all Americans.