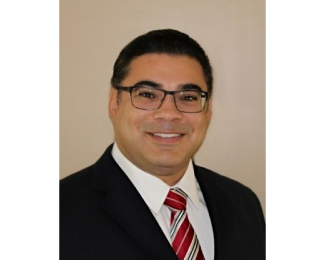 NETL’s José Figueroa, supervisor, Carbon Capture Team, has received the Great Minds in STEM™ (GMiS) Hispanic Engineer National Achievement Award for advancing projects critical to the success of U.S. decarbonization efforts while serving as an exemplary professional who is helping to ensure a talented and diverse pipeline of researchers for the future.

Figueroa will be recognized as a Luminary Honoree by the GMiS Hispanic Engineer National Achievement Awards Corporation at the 33rd annual GMiS Conference, which will be held virtually Oct. 11-22.

Luminary honorees represent science, technology, engineering, and mathematics (STEM) field leaders who initiate, collaborate, and lead key programs and research within their organizations and make significant contributions to the Hispanic technical community as leaders. Figueroa has worked diligently to advance NETL’s research goals and inspire future engineers and scientists from various universities and underrepresented communities.
From the NETL Pittsburgh site, Figueroa manages the implementation of the Lab’s approximately $700 million portfolio of active carbon capture research and development projects, with an emphasis on maturing technology from early-concept development to market-ready solutions.

These research projects include pre- and post-combustion technologies to capture carbon dioxide, the most prevalent form of greenhouse gas, from industrial sources, as well as cutting-edge projects to develop direct air capture and second-generation solvents, sorbents, membranes and hybrid technologies.

In addition, Figueroa promotes diversity at all levels, knowing that diversity brings new perspectives and ideas to resolve research challenges. He has served as vice president and board member of the Hispanic Chamber of Commerce, the predecessor to the Pittsburgh Metropolitan Area Hispanic Chamber of Commerce (PMAHCC), and was NETL’s liaison to the organization’s board of directors. Figueroa continues to volunteer and promote STEM and professional advancement as a member of PMAHCC.

“Jose’s talent and tenacity are representative of many Hispanic Americans of the past and present who have blazed the trail for young people of all ethnic backgrounds who are interested in advancing science to help create a sustainable energy future for our nation,” said Michele Ostraat, chief operating officer and director of Laboratory Operations at NETL. “In addition to being a valuable member of our NETL team, José is an outstanding role model for Hispanic American students today. We look forward to seeing him honored at the Hispanic Engineer National Achievement Awards Conference next month.”

Figueroa’s parents immigrated to the U.S. from Honduras. He was raised in New York City, where he learned the value of education, honesty and hard work. Figueroa worked in various jobs to pay for college, earning a degree in mechanical engineering that opened doors to positions at Gilbert/Commonwealth Inc. and Parson Power Group Inc. before joining NETL in 1999.

Figueroa continued his education at the University of Pittsburgh’s Joseph M. Katz Graduate School of Business where he earned a master’s in Business Administration. His studies provided Figueroa with the business acumen to introduce a business-focused approach into the carbon capture, utilization and storage research industry and expedite technology development.

Finding tremendous satisfaction in assisting, guiding and encouraging those who want to pursue STEM careers, Figueroa regularly mentors students, early-career researchers and entrepreneurs, with a focus on encouraging each of them to realize their full potential. He enjoys speaking at conferences and to academic groups about career opportunities in STEM.

Figueroa has forged collaborations with some of the top minds in engineering fields all over the world and brought them together at international venues that he co-chaired, such as technology conferences of the Founder Societies for Carbon Management, a joint initiative of five major engineering societies.

He also has worked with the California University of Pennsylvania’s Industry and Advisory Board to support STEM-related careers and business development within the local community.

NETL is a U.S. Department of Energy national laboratory that drives innovation and delivers technological solutions for an environmentally sustainable and prosperous energy future. By leveraging its world-class talent and research facilities, NETL is ensuring the innovation and delivery of affordable, abundant, and reliable energy that drives a robust economy and national security, while developing technologies to manage carbon across the full life cycle, enabling environmental sustainability for all Americans.