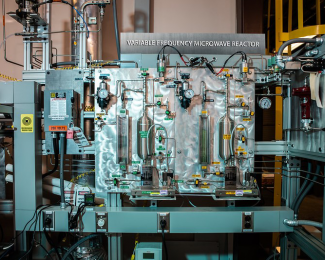 The same technology that turns a frozen entrée into a delicious hot meal in minutes is being advanced by NETL researchers to bring revolutionary changes to the field of reaction chemistry and produce valuable chemicals like hydrogen using less energy and at lower cost.

“At NETL, we are working to unleash the power of microwaves to advance gasification of carbon materials to significantly cut costs and reduce energy requirements while achieving higher yields and greater selectivity of products,” said Mark Smith, Ph.D., a member of NETL’s Reaction Engineering Team.

Gasification is accomplished through a series of chemical reactions within a gasifier. One of the Reaction Engineering Team’s focus areas in gasification research involves transforming carbon ore, biomass or other feedstocks such as waste plastics into gases by reacting the material at high temperatures, but without combustion, by controlling the amount of oxygen or steam present in the reaction.

Composed primarily of hydrogen (H2) and carbon monoxide (CO), syngas has a variety of uses. For example, it can be refined into pure hydrogen, transformed into liquid transportation fuels or used to create electricity.

“Hydrogen produces only heat and water when used as an energy source, which explains why affordable production of hydrogen for use in fuel cells to power vehicles or in turbines to generate electric power are priorities as we work to establish a net-zero carbon emissions economy by midcentury,” Smith said.

As part of an NETL research project, Smith and his colleagues tested the gasification of three ranks of coal (sub-bituminous, lignite and bituminous) in a microwave reactor. The team reported microwave gasification produced significantly more syngas than conventional thermal gasification for all three coal ranks and found microwave heating can lower the bulk reaction temperature by 250° C while achieving the higher conversions.

These reactors are among the most advanced in the world and have been used for collaborations with West Virginia University, the Rapid Advancement in Process Intensification Deployment (RAPID) Institute, Malachite Technologies, the University of Pittsburgh and others.
NETL has established microwave (mWave) technology as a key lab initiative. This technology represents the next frontier of science in chemical processes and manufacturing. NETL is conducting fundamental science studies of microwave reaction chemistry to better understand this breakthrough technology and predictably model it for commercial uses. These efforts will significantly improve the energy efficiency of industrial processes, increasing selectivity and enabling scalable and distributed low-carbon applications.

Microwave gasifiers at a modular scale (5-50 megawatts) remain more expensive than traditional gasifiers. “That’s why our work calls for the completion of a thorough economic analysis to identify the potential cost savings in other parts of the gasification process. Microwaves give better product yields, so byproducts are less, which can make the gas separation processes after the gasifier smaller and less costly to operate than with a thermal system. Those are the types of benefits that need to be considered and weighed against the higher cost of the microwave technology,” Smith said.

Building on their success, Smith and his team are looking to the future and how to apply their research to other areas.

“The use of coal fines and similar wastes is an important part of our future gasification work. It has the potential to produce more syngas while simultaneously mitigating the significant environmental problems associated with waste coal storage and disposal,” Smith said.