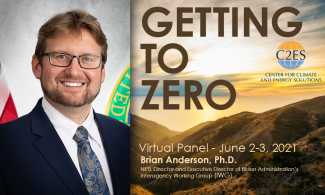 This virtual roundtable discussion event was organized by the Center for Climate and Energy Solutions (C2ES), a nonprofit, nonpartisan think tank focused on advancing climate change and energy policy. C2ES works closely with companies across key sectors to advance policies that address climate change. Three years ago, C2ES launched the Climate Innovation 2050 initiative, which brought together more than three dozen leading companies to examine pathways toward decarbonizing the U.S. economy. In late 2019, this initiative produced Getting to Zero: A U.S. Climate Agenda, which outlines federal, state and local policies to put the U.S on the path to carbon neutrality.

The 2021 Getting to Zero series kicked off in Morgantown, West Virginia, home of one of NETL’s three main research campuses. This location was chosen to consider ways to leverage the Mountain State’s strengths to attract private investments that could create a vibrant and diversified economy that can thrive in a low-carbon future.

“NETL’s carbon capture, utilization and storage research program has some of the world’s most talented scientists hard at work finding ways to mitigate climate change in a variety of ways, whether it be directly capturing CO2 from the atmosphere or converting it into useful products and thereby transform a liability into an asset,” Anderson said. “In pursuit of a decarbonized economy and energy infrastructure, NETL scientists are also exploring the potential of hydrogen, such as gasification and reforming technologies for carbon-neutral production and using hydrogen for electrical generation, manufacturing and fuels production.”

“With our research portfolio including more than 1,000 research activities across all 50 states, a total award value exceeding $5 billion and hundreds of top-tier scientists and engineers, NETL is in a prime position to realize the vision of a prosperous decarbonized economy. A great place to start is right here in West Virginia,” Anderson continued.

West Virginia possesses significant natural resources and has long provided the energy and infrastructure that powers the American economy, from power generation to steel production and more. The state still accounts for more than a tenth of the nation’s coal production and is the sixth-largest producer of natural gas, but faces significant challenges in an increasingly global economy that is looking to reduce carbon emissions. Despite this, West Virginia brings significant expertise in the energy sector and proximity to large population centers and freight corridors.

The roundtable event featured two sessions. “Investment Barriers and Opportunities” explored ways for West Virginia to leverage its unique strengths, the critical role infrastructure will play in drawing employers to the state and the role policy can play to support those efforts. The second session, “Industry Manufacturing in a Low-Carbon Economy,” examined how the low-carbon transition affects the market landscape for industrial and manufacturing companies, as well as implications for the region’s workforce.

The IWG was established by Executive Order 14008, Sec. 218 in January, to ensure the shift to a clean energy economy that will good-paying union jobs, spur economic revitalization, remediate environmental degradation, and support energy workers in coal, oil and gas and power plant communities across the country. The IWG prepared an initial report that includes recommendations to catalyze robust economic activity and support workers in America’s energy sector. Under Anderson’s leadership, NETL researchers have advanced a range of technologies to ensure affordable, abundant and reliable energy that drives a robust economy and national security.