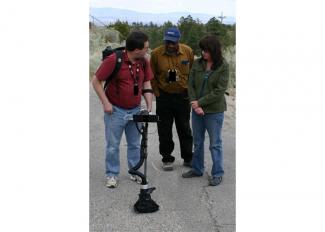 REEs are vital in the construction of medical equipment, energy components, defense technologies, modern electronics and a host of other consumer goods. In many cases, these REEs cannot be substituted with other minerals, and other countries control most of the world’s REE supplies.

The LANL researchers are combining their expertise to develop a backpack-size field-portable unit to provide simultaneous chemical and mineralogical analysis of REEs. Specifically, the LANL team is leveraging their research in laser-induced breakdown spectroscopy (LIBS) combined with Raman spectrometry.

LIBS involves ablating material from the surface of a sample with a focused laser and generating a plasma that is about twice the surface temperature of the sun. This plasma consists of atoms and ions from the sample that emit light at specific wavelengths from which the chemical composition of the sample is determined. Raman spectroscopy involves illuminating a sample with a green laser (in LANL’s work) such that the minerals in the sample vibrate at specific frequencies and can specify REE-mineralogical composition. Knowing the mineralogy of the REE-containing materials helps to identify the means by which the REEs can be extracted and separated from a potential feedstock material.

This integrated LIBS and Raman instrument enables the assessment of the REE chemistry and mineralogy in a single field instrument without the need for sample preparation and will be used to rapidly determine both concentration and composition in 10 seconds, which will save time and money in view of prospecting for resources that contain high REE concentrations in forms that are easily extractable. Given the current stage of development, LIBS detection limits are estimated at less than 10 ppm. REEs are commonly found in phosphates, and this instrument can also detect sulfates and carbonates.

“LANL’s combined portable LIBS+Raman system was originally developed in collaboration with NASA for use on Mars. With NETL funding, the technology is being explored for uses closer to home,” said Jessica Mullen, a project manager with NETL’s Minerals Sustainability Team. “By applying technologies in new ways and for new purposes, NETL and its partner organizations in academia, industry, and DOE National Laboratories are developing new uses for an old fuel source that will incentivize new environmental remediation while also creating new jobs and, in the process, breathe new life into coal communities that have suffered through economic downturns.”

Assembly of the integrated LIBS and Raman instrument into a portable backpack-carried field instrument is underway, with laboratory and field testing scheduled to begin this summer.