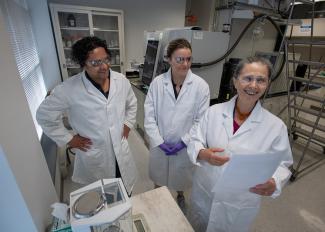 NACE International and the Association for Materials Protection and Performance (AMPP) has announced that NETL’s Margaret Ziomek-Moroz, Ph.D., has been selected to receive the 2021 NACE Fellows honor, becoming a member of the class of NACE Fellows for her sustained and widely recognized contributions to corrosion control. Ziomek-Moroz will receive her award during CORROSION 2021, NACE’s virtual conference and expo held April 19-30.

These unique MBES provide remote, in-situ and real-time monitoring of environmental humidity and material corrosion rates. MBES can also detect the onset of localized corrosion, such as pitting. In 2020, a MBES was successfully field tested in natural gas at the Colorado Engineering Experimental Station. A paper describing the environmental humidity and corrosion rate of the pipeline material will be presented at CORROSION 2021

Her research, both at NETL and before she joined the Lab, has spanned numerous topics in corrosion and corrosion control. Her research has included investigations on the stress corrosion cracking of a nickel-base superalloy for nuclear applications; development of coatings that prevent coastal bridges from corroding, which extends the service life of critical infrastructure; development of environmentally friendly electrolytes for electrochemical machining of brittle alloys; and research aimed at discovering ways to lower the cost of solid oxide fuel cells by investigating the resistance to corrosion of affordable metallic interconnect materials.

Ziomek-Moroz grew up in Poland and earned a doctorate in chemistry with a specialization in corrosion and its prevention from the Institute of Physical Chemistry of the Polish Academy of Sciences in Warsaw, Poland. She currently lives in Albany, Oregon.

She acts as a mentor and educator for those interested in STEM (science, technology, engineering and mathematics) activities. Her mentoring work has guided several graduate students into the field of corrosion and corrosion control, where their subsequent work earned them recognition through NACE student awards.

Additionally, Ziomek-Moroz has been a role model for middle and high school students interested in STEM through her participation as a corrosion educator in the U.S. Department of Energy’s Science Bowl and DaVinci Days. Currently, she is a mentor for two graduate students pursuing their doctorates in the materials science and engineering area with a focus on corrosion at Oregon State University and the Pennsylvania State University.

“The Association Awards are an opportunity to celebrate those individuals who have made significant contributions to our industry, whether it be in corrosion science, engineering, education or extraordinary service to the association,” said Tim Bieri, Chair of AMPP. “It is an honor to recognize the extraordinary efforts and achievements of our members like Margaret Ziomek-Moroz, who have done so much to advance the association and the industry.”

The Association for Materials Protection and Performance (AMPP) is focused on the protection of assets and the performance of industrial and natural materials. AMPP was created when NACE International and SSPC: The Society for Protective Coatings united after more than 145 combined years of expertise and service to industry and individual members worldwide. Today, AMPP is the world’s largest corrosion control and protective coatings organization serving more than 40,000 members in 130 countries. AMPP is headquartered in the United States with offices in Houston and Pittsburgh, and additional offices in Brazil, Canada, China, Dubai (training center), Malaysia, Saudi Arabia, and the United Kingdom.