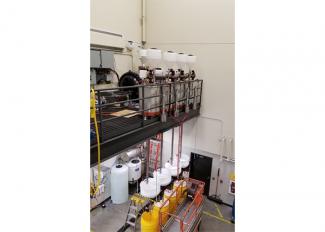 An NETL-supported project at the University of North Dakota (UND) to economically extract strategically important rare earth elements (REE) has shown that lignite is a potential domestic source of these vital minerals using a process that also produces valuable by-products and takes advantage of existing mining infrastructure.

REE have been designated as critical minerals by the U.S. Department of the Interior due to their unique properties, which are essential and often non-substitutable in a variety of consumer goods, energy systems and defense applications. With China largely controlling the global production and value chain, the U.S has begun moving to generate domestic supplies of these critical resource, a task NETL has supported with its partners in academia such as UND.

The upgraded process not only extracts the REEs but produces a significantly improved lignite product as a by-product from the process. The upgraded lignite material may be easily integrated into additional added-value coal opportunities, including activated carbon production, combined heat and power, humic acid production, and as an upgraded fuel for coal-fired utility/industrial use.

Following the leaching process, a hydrometallurgical process was designed to generate REE concentrates of various purities, including a primary concentrate that averaged greater than 50% mixed rare earth element oxide (REO) purity with the extracted REE mass containing more than 70% of the total REE mass present in the lignite coal feedstock. REO readily form from rare earth elements as they are typically very reactive with oxygen in the ambient atmosphere. These thermally stable oxides are commonly the final product when rare earth-containing-materials are fired in the presence of oxygen.

“The process developed by the UND team has the potential to deliver in many fields,” said Charles Miller, NETL federal project manager. “Not only can it serve as a basis for a new REE extraction industry, but it can also deliver valuable by-products while taking advantage of existing mining infrastructure, which can hopefully make the entire process easier and more attractive for potential investors.”