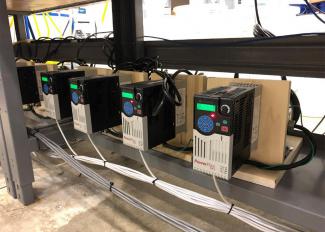 Researchers at WVU’s Water Research Institute used the on-campus Rare Earth Extraction Facility (REEF), which was designed, constructed and commissioned in 2018 as a part of this cooperative agreement, to demonstrate that acid mine drainage (AMD) precipitates from mining sites could be transformed into valuable revenue streams for local communities and businesses using the method of acid leaching solvent extraction (ALSX).

“The research conducted at WVU continues to be a source of encouragement,” said Jessica Mullen, NETL federal project manager. “While there is still more work to be done, these researchers have demonstrated that Appalachia can be an attractive source of domestic REE production. If optimized, we may one day see AMD as an opportunity for economic growth instead of just a waste product, all while cleaning up the environment in the process.”

Recent progress has also demonstrated the economic potential of the ALSX method. For example, the purities of extracted REE product grades is more than 90%, far exceeding the original project goal of 2%. Recoveries generally exceeded 60%, while heavy REEs consistently exceed 45% of the total REE production.

Furthermore, techno-economic analyses were conducted, which showed that the overall economic viability for extraction of REE from AMD resources is strongly influenced by the feedstock grade entering the acid leach tanks. A simple sensitivity analysis suggested that increasing the feedstock grade a small amount by using an upstream concentration step produced an exceedingly favorable economic outcome.

The work conducted at WVU is an example of projects across the country supported by NETL and DOE that have resulted in the development of first-of-a-kind, domestically operating, bench and pilot-scale facilities for the recovery of small quantities of REE from coal-based materials.