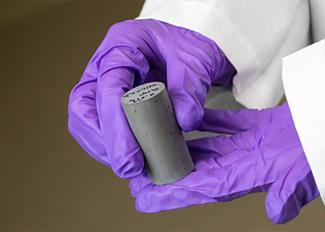 Throughout 2020, NETL’s materials engineering and manufacturing research has demonstrated how historic energy resources can be used in remarkable new ways and how elements commonly thought of as a liability may present exciting new economic opportunities.

Harnessing the Potential of Carbon Dioxide

For example, carbon dioxide (CO2) may one day transition from a waste gas that contributes to climate change to a high-value feedstock used in the production of fuels, pharmaceuticals, plastics, fertilizers and a range of consumer goods.

During the summer, NETL researchers made important strides in dry reforming, a process that reacts CO2 with methane, rather than steam or oxygen, to yield the mixture of hydrogen and carbon monoxide known as synthesis gas or syngas, a chemical building block for many products.

The promising technology driving a greener future for CO2 is microwave-assisted dry reforming of methane (MW-DRM). Microwave systems enable the high-temperature reactions required by the process because they can selectively and efficiently heat the catalyst bed in the microwave reactor without needing to heat the entire reactor volume.

“From a functional perspective, the catalyst bed can be kept hundreds of degrees hotter than the surrounding area, and the necessary energy is efficiently directed to where the chemistry occurs,” said Chris Marin, Ph.D., a research scientist on NETL’s Functional Materials Team and lead author of the study “Designing Perovskite Catalysts for Controlled Active-Site Exsolution in the Microwave Dry Reforming of Methane.”

Steam methane reforming has been the dominant method for producing syngas by reacting hydrocarbons with water. “But in recent years, CO2 has come under growing consideration as an oxidizing agent to produce syngas because its use could help reduce greenhouse gas emissions from fossil energy plants,” Marin explained.

“That’s what makes our study so exciting. We’re turning the table on greenhouse gas and putting it to work to produce synthesis gas, which can be used to make fuels for our vehicles and even everyday products for our homes like wax paper,” he added.

The study also pointed out that the MW-DRM process could provide new markets for methane. Currently, large volumes of methane are flared off at gas wells sites, adding to global emissions.

The Lab’s research into advanced concrete additives could one day revolutionize the construction of bridges and other infrastructure, saving communities money and time while also spurring economic demand for one of the nation’s most abundant and historic resources: coal.

Due to its low cost, versatility, and malleability concrete remains the most popular construction material in the world. However, concrete, at least in its conventional cement paste composition, has several limitations.

These include susceptibility to chemical corrosion from the salts used for deicing roads and deterioration from the freeze-thaw cycles that occur when water penetrates cracks during winter months. These drawbacks lead to lengthy and costly inspection periods and repairs, often disrupting the flow of traffic and public life in general in the process.

However, a concrete additive containing a carbon nanomaterial called graphene can counter some of these drawbacks due to its excellent mechanical and physical properties. For example, graphene nanomaterials could fill the smallest of cracks within the cement structure as it hardens, increasing the durability and longevity of the structure by preventing salt and water from penetrating the concrete and causing damage.

NETL developed the idea of producing graphene materials from coal, marking a significant development because graphene is traditionally sourced from graphite, which is a far more expensive feedstock.

Graphene is an allotrope of the element carbon. This means it possesses the same atoms, but arranged in a different way, giving the material different properties — like how diamonds and graphite are both made of carbon but with very different properties. Lightweight, flexible and thinner than human hair while being several times stronger than steel, graphene possesses tremendous potential for replacing certain materials while enhancing others already in common use such as concrete.

“We have found that coal-based nanomaterials could improve the mechanical properties of cement composite by 20-25 percent and increase resistance to water damage by two orders of magnitude,” explained Yuan Gao, a research scientist leading NETL’s work on graphene enhanced concrete. “We can reach similar levels of improvement regarding concrete’s strength and durability via graphene, but at reduced expense.”

The cost of making graphene concrete additives sourced from graphite remains one of the biggest impediments to widespread commercial use of the material. However, if it could become a mainstay, Gao said this could create more economic activity downstream because coal is more abundant and cheaper to extract.

“Concrete is the most widely used construction material, with 10 billion tons of it produced every year around the world,” she said. “Large-scale application of coal-based carbon nanomaterials in concrete could greatly promote the consumption of domestic coal.”

Throughout 2020, NETL researchers also participated in several events and conferences such as The Minerals, Metals, and Materials Society’s Annual Meeting and Exhibition to share the Lab’s successes with the private sector. This continued in virtual settings amidst the COVID-19 pandemic at the Materials Science and Technology Technical Meeting and Exhibition and a congressional launch of the House Critical Materials Caucus in which NETL Director Brian Anderson highlighted the Lab’s scientific and technical solutions aimed at developing an economically competitive supply of vital rare earth elements and other critical materials.