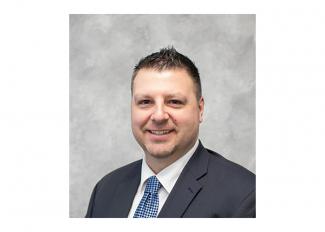 Since joining NETL in 2009, Senior Economist Justin Adder has played a major role demonstrating the importance of the Lab’s research while also navigating new trends in power generation and other industries connected to America’s fossil fuels, such as how the advent of abundant natural gas fundamentally changed the domestic energy sector, as part of the Energy Markets Analysis Team (EMAT).

Adder grew up in Somerset, Pennsylvania, and earned his bachelor’s degree in economics and equivalent in accounting from Washington & Jefferson College. He continued his education at George Washington University in Washington, D.C., receiving his master’s in business administration with a concentration in finance.

“During the summer of my junior year of college, I interned with the Somerset County Economic Development Council (SCEDC). One of the projects I worked on was attracting companies and gaining community acceptance for the development of wind farms,” Adder said. “Somerset County was home to the state's first commercial wind farm, the Green Mountain Wind Energy Center, which was a 10.4-megawatt wind farm. Somerset County is currently home to the most active wind farms and the most wind turbines in the state. After my internship with SCEDC I decided I would like to try and stay in the energy sector.”

Adder went on to work for the federal government as an economist with the Federal Energy Regulatory Commission (FERC), where he was responsible for analyzing data in natural gas and oil pipeline tariff filings to resolve economic issues and determine compliance with FERC rules, regulations, rates and policies.

After working in Washington for six years, Adder and his wife chose to return to Pennsylvania to be closer to family. At the time, NETL was filling several positions under the American Recovery and Reinvestment Act of 2009. Adder applied and was hired.

Combining his experiences with energy and economics, Adder has taken on numerous responsibilities that help guide NETL in its work to provide affordable energy using the nation’s vast fossil fuel resources with EMAT.

“The team’s role is to assist the researchers in guiding the R&D that takes place at the Lab,” Adder said. “We provide upfront analysis of current and future market needs. By identifying these needs and conditions, researchers can design technologies that will be needed by the marketplace and be deployable at an acceptable cost.”

Adder and the rest of EMAT are also tasked with conducting benefits analyses associated with the deployment of technologies developed at NETL. Such analyses, which include identifying increases in gross domestic product, employment and other metrics, highlight benefits of the researchers’ work and demonstrate the value of their programs.

Since Adder joined NETL and EMAT, the country has experienced profound change in the energy ecosystem, including increased renewable penetration, significant use of drilling, and a global priority to combat climate change. While NETL greatly contributed to the development of the Shale Revolution via technological research, it was with Adder and the rest of the team that the Lab really became involved in examining the future economics of this energy boom. At the time of his hiring, exploration of the Marcellus formation was in its infancy and the Utica formation was still a few years away from development.

“As the shale boom took off and low-cost natural gas hit the market, a need for natural gas market and pipeline infrastructure analysis emerged. With NETL located in the heart of the shale revolution, it only made sense for the Lab to play a bigger role in that area,” Adder said. “Today, NETL is very involved in technology development for increased natural gas utilization. The Lab identified this area as a key laboratory initiative and is leveraging its world class capabilities, in partnership with industry, to drive innovation and deliver solutions.”

Tasked with conducting in-depth analyses and disseminating them through technical reports, research papers, models and oral presentations, Adder and EMAT have documented and demonstrated the research and key findings at NETL to the rest of the federal government. These reports help secure federal funding needed to keep the Lab’s research going. Adder’s work also illustrates the economic possibilities for the Appalachian region.

Examples include the 2018 “Ethane Storage and Distribution Hub in the United States Report to Congress” and the Presidential Executive Order, “The Appalachian Energy and Petrochemical Renaissance: An Examination of Economic Progress and Opportunities.”  These reports highlighted the potential in Appalachia for the development of a new natural gas advanced manufacturing corridor based on the tremendous low-cost resource from the Marcellus and Utica shales, along with the accompanying security and reliability benefits derived from geographic diversity in the nation’s petrochemicals manufacturing base.

EMAT’s findings showed that petrochemical expansion in the Appalachian region thanks to abundant shale resources would increase geographic diversity and support resilience, reliability and energy security throughout the country. Furthermore, Adder and the team determined that the development of new petrochemical capacity in Appalachia is not necessarily in conflict with Gulf Coast expansion. Expanded Appalachian capacity may serve regional demand for liquid natural gas derivatives, freeing up Gulf Coast production for other markets, including exports overseas.

Adder, along with Peter C. Balash, John H. Brewer III, Kenneth C. Kern, Christopher J. Nichols, Gavin C. Pickenpaugh and Erik P. Shuster, was part of the Department of Energy (DOE) Office of Fossil Energy (FE) and NETL Bomb Cyclone Analysis Team. This team collected and analyzed data regarding trends that developed during the December 27, 2017, to January 9, 2018, winter event known as a "bomb cyclone." This information collected was critical for helping identify the impact of baseloaded units in providing the required power during this period of extremely high energy demand.

For example, the study showed that coal was the most resilient form of power generation during the bomb cyclone and that removing coal from the energy mix would worsen threats to the electrical grid’s dependability during future severe weather events. The new report also warned against overestimating the nation’s ability to respond to weather events if the current rate of coal plant retirements continues.

For their contributions to DOE and the nation, the FE/NETL Bomb Cyclone Analysis Team was recognized by then-Secretary of Energy Rick Perry with the 2019 Secretary of Energy Honor Award. Adder said this was the proudest moment in his NETL career.

“I’m also privileged to work with such amazing co-workers, many of which I now call friends outside of working hours,” he said, noting that his parents have been a continual source of motivation throughout his career. “This is even more true given that I am now a father of three young children, so I can appreciate even more the sacrifices and commitments they had to make to ensure my sister and I were successful in life.”