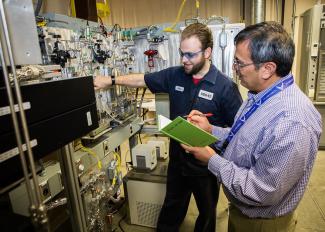 NETL talent and expertise can strengthen U.S. capabilities to serve as a world leader in the conversion of natural gas and its liquid components into the chemical feedstocks to manufacture an extensive list of commodities and consumer products used daily.

To maximize growing investment in research and development (R&D), NETL is prioritizing the Lab’s efforts to support projects focused on converting natural gas into the chemical building blocks needed to manufacture higher value products and positioning its multidisciplinary teams to support innovative technologies to transform the petrochemical sector.

U.S. energy security is predicated on increasing natural gas usage. The chemicals marketplace also relies predominantly on natural gas, and the petrochemical industry is actively seeking to identify more uses for natural gas as a product feedstock and exploring ways to deliver those products to market faster, at lower cost and with less environmental impact.

As home to the massive Marcellus and Utica shale gas formations, Appalachia is positioned to serve as the epicenter for this petrochemical resurgence, which could generate a significant number of good-paying jobs in advanced manufacturing while enhancing the U.S. economy.

The region’s abundant levels of shale gas have already spurred construction of the Shell Chemicals petrochemical plant in Beaver County, Pennsylvania, a $6 billion project expected to open in 2021 about 25 miles northwest of Pittsburgh, as well as plans by PTT Global Chemical America to build a petrochemical plant in eastern Ohio.

Additional major investments may follow. In its June 2020 report, “The Appalachian Energy and Petrochemical Renaissance: An Examination of Economic Progress and Opportunities,” the U.S. Department of Energy (DOE) stated that “the shale gas revolution has the potential to last for more than a century.”

Eliminating roadblocks to maximize the production of higher value products and chemicals using shale gas and natural gas liquids (NGLs) such as ethane and propane, are too complex for any one company to address. That’s where NETL can provide invaluable support and technical expertise.

The Lab has decades of experience converting hydrocarbons to various products and the established infrastructure needed for expanded R&D. Also, advancements by NETL’s world-renowned engineers and scientists, coupled with a proven track record of working closely with industry and top research universities to move innovations forward, place NETL in a prime position to help drive and lead this generational opportunity.

Shale gas consists of several hydrocarbon. NGLs, including ethane, propane, butane, isobutane, pentane and pentanes plus, account for a significant portion of the fuel stream. Petrochemicals are derived by processing hydrocarbon feedstocks such as NGLs. A process called “cracking,” which breaks apart the chemical bonds of the ethane, produces ethylene, the root chemical for plastics, resins, adhesives and synthetic products used in nearly every aspect of modern life.

Polyethylene is produced from ethylene. The most widely used plastic in the world, polyethylene can be found in components of artificial hips and knees and is needed to manufacture medicines, electronics, food packaging, detergent bottles, automobile fuel tanks and many other products.

NETL’s capabilities provide multiple advantages to move this petrochemical resurgence forward.  “Partnering with NETL offers industry and academic researchers the opportunity to became part of a multidisciplinary team that has been working for years on conversion of hydrocarbons to various products at all scales across the value chain using the Lab’s state-of-the-art infrastructure and equipment,” said Bryan Morreale, Ph.D., executive director of NETL’s Research & Innovation Center.

Partnering with NETL opens doors to work alongside researchers who are developing:

NETL and its partners also are actively developing membranes to clean and convert natural gas streams into useful products. One breakthrough, currently awaiting patent, converts methane in natural gas to benzene, toluene and xylenes (BTX), which are other chemical building blocks to produce plastics. The technology has improved process outcome by 300% using a catalytic membrane reactor.

The Lab’s researchers also are unleashing the power of microwaves to convert fuels such as coal, oil and natural gas into marketable chemicals and products. In addition to providing higher yields with lower temperatures and less energy, this work is also advancing the understanding of the science behind the reactions.

Traditional fuel conversion processes rely on thermal heating, which works from the outside in, according to researchers at NETL’s ReACT (Reaction Analysis & Chemical Transformation) facility. However, microwaves operate on a molecular level, allowing rapid, selective heating.

NETL researchers have developed a direct method for methane conversion using microwave-assisted catalysis. In one successful study, NETL has demonstrated that microwave irradiation can achieve significantly higher ammonia yields at lower temperatures (300 degrees Celsius) and ambient pressures using metallic-supported catalyst systems. Ammonia is an important precursor to a variety of fuels, foods and pharmaceuticals, and developing a more efficient system could save considerable water and energy resources.

NETL’s Computational Materials and Engineering Team is focusing on recycling carbon dioxide (CO2) generated by fossil energy plants and other industrial sources into chemicals, alcohols, acids and syngas, which are used to manufacture fuels, polymers and fertilizer, through electrochemistry.

In the presence of electricity, CO2 molecules and protons from splitting water molecules react on an appropriate catalyst to form chemical building blocks for hundreds of useful products. Whereas traditional reaction processes often require high temperatures and pressures, electrochemistry can be conducted at near room temperature and ambient pressure using electricity from a renewable energy source such as wind, solar or geothermal, which makes the process more efficient and environmentally benign.

Gold is one of the most selective catalysts for electrochemically converting CO2 into carbon monoxide (CO), which is used to produce the various chemicals needed to manufacture household cleaning products, paints, adhesives and thousands of everyday products.

Morreale foresees that NETL can provide a framework to develop technologies from concept and eventually into the hands of commercial developers, where they will make the most impact.

“That will enable us to bridge the so-called Valley of Death,” or the gap between initial research discoveries and full-scale commercialization by industry during which funding or support for a new technology can fail, Morreale said.

“The work to be undertaken not only strengthens the nation’s capabilities to serve as a world leader in efficient conversion of natural gas into a valuable project, it will ensure a robust, reliable supply of vital materials needed by manufacturers in an exciting new industry,” Morreale said.