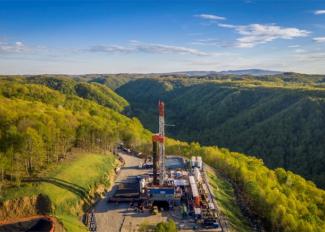 NETL Recognized for Innovation in Oil and Gas Exploration

An NETL-sponsored project that could unlock access to large reservoirs of natural gas in Central Appalachia and extract those resources with technology designed to leave a light environmental footprint has earned accolades from state and industry officials.

The Virginia Department of Mines, Minerals and Energy’s Division of Gas and Oil, in partnership with the Virginia Oil and Gas Association (VOGA), presented NETL and its project partners with the Excellence in Exploration Innovation Award for the development of the Emerging Stacked Unconventional Plays (ESUP) field laboratory and characterization well in southwestern Virginia.

Click here to review the complete list of winners who received the 2019 Virginia Gas and Oil Industry Awards.

The award is traditionally given out at the fall VOGA dinner. However, the event was canceled this year. The award was forwarded to Robert Vagnetti, the Federal Project Manager and a member of NETL’s Unconventional Oil and Gas Team.

“That’s most appropriate as Rob is a seasoned professional whose experience and expertise have been crucial to moving this complex project forward and making it a success,” said John R. Duda, Associate Director, Oil and Gas, Technology Development & Integration Center, NETL.

ESUP could be a game-changer for Central Appalachia, a region that is well-known for coal but is also home to abundant unconventional and largely unexplored gas resources, including coalbed methane, shale gas and other low permeability natural gas formations.
Many of these gas resources are vertically stacked so that a single well could produce simultaneously from multiple reservoirs located at various depths throughout the rock strata. The goal of the ESUP project, which NETL is managing for the U.S. Department of Energy’s (DOE) Office of Fossil Energy, is to investigate and characterize the resource potential for multi-play production in these emerging unconventional reservoirs.

In June 2020, the team’s characterization well in Wise County, Virginia, reached total depth of 15,155 feet and provided samples of rock core, fluids and other geophysical data to improve the understanding of the geology and resource potential of the Cambrian Rogersville Shale Formation, as well as other deeply buried formations.

The 4½-year project, which is scheduled for completion in September 2022, has received more than $8 million in DOE funding. According to Vagnetti, project partners are currently analyzing core and well log data to determine the optimal location to conduct a diagnostic fracture injection test this fall to better understand these unexplored gas-bearing rock formations.