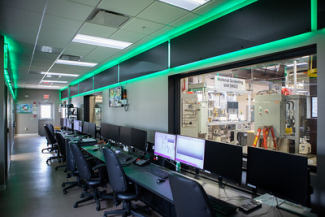 NETL’s pioneering Microwave Ammonia Synthesis (MAS) took home the 2020 IChemE Global Awards in the category of Research Project for its potential to aid in agriculture, energy production and other applications while also lowering costs and overall energy use.

Ammonia is one of the most widely used chemicals compounds worldwide, alongside polyethylene, and is largely used in the fertilizer market. Liquid ammonia also possesses all the desired physiochemical properties for Carbon Neutral Liquid Fuels which allow power generation without carbon dioxide (CO2) emissions.

For more than a century, ammonia has been produced in bulk using the Haber-Bosch process which functions at high pressures and temperatures and requires a constant supply of energy. However, the MAS process developed by NETL in partnership with West Virginia University operates at near ambient pressures and is not dependent on a continuous supply of power because only a small area is heated during the process via microwave reactions.

In fact, the MAS process is so efficient it can run off renewable power sources such as the solar panels and windmills found on farms in Iowa, an example of where the technology can be effective. Because the process does not need a constant supply of power, it can function even during intermittent power supplies during times of low wind and limited sun exposure, allowing for increased flexibility for ammonia producers.

The MAS technology is also highly modular, meaning ammonia production can be shifted locally rather than rely on large scale, centralized production facilities along the Gulf Coast which require product to be transported to market, driving up costs and CO2 footprints in the process. The Haber-Bosch method loses efficiency when scaled down, a problem that prompted the MAS research following a solicitation by the Advanced Research Projects Agency – Energy.

“When most people think of a microwave, they think of something to prepare food, but with this research we’re using microwaves to advance the fields of chemistry and physics in new and exciting ways,” explained NETL researcher Christina Wildfire. “There are so many potential benefits and applications for MAS once it’s optimized, and IChemE recognizing it with these awards sends a powerful message.”

Dushyant Shekhawat, supervisor for the Lab’s Reaction Engineering team, said NETL worked together with West Virginia University (WVU) on this project. The microwave-assisted ammonia synthesis was carried out incorporating the fields of physics, chemistry, engineering, and modular science technology across from NETL and WVU.

Professor. John Hu’s team from WVU focused its efforts on microwave-specific catalyst development while NETL concentrated focused on implementing conducting reaction studies on the catalysts within in its on-site microwave reactor. Additionally, NETL’s efforts included optimizing the reactor for this process through varying important microwave field characteristics like frequency, power, and pulse.

“By combining our assets, NETL and WVU synergized to develop microwave catalysis technologies with applications in ambient pressure ammonia synthesis, ,” said WVU Professor John Hu. “In the process, we discovered potentially revolutionary uses for a process often taken for granted.”