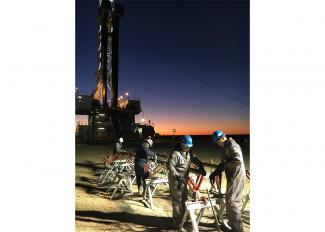 A team of national laboratories, led by Lawrence Berkeley National Laboratory and Lawrence Livermore National Laboratory (LLNL) with support from the National Energy Technology Laboratory (NETL) and Stanford Linear Accelerator Laboratory, is collaborating in a multi-scale modeling project that resulted in an approach that significantly improves the prediction of hydraulic fracture propagation. The results and modeling approach from the multi-lab project titled “A New Framework for Microscopic to Reservoir-Scale Simulation of Hydraulic Fracturing and Production: Testing with Comprehensive Data from Hydraulic Fracturing Test Site (HFTS) and Other Hydraulic Fracturing Field Test Sites” have since been adopted by numerous oil and natural gas operators following the publication by the Society of Petroleum Engineers (SPE).

Until recently, no simulation framework has existed that allows seamless and integrated prediction of multiple geologic, fluid flow and operational variables across spatial scales extending from pore, core through reservoir scale. However, the addition of this framework can maximize the analysis of data gathered during the exploration and extraction of oil and natural gas resources without additional computational costs.

The goal of this research was to improve the understanding of the processes that drive the mechanical and geochemical/hydraulic responses to stimulation and production of shale resources. High-quality field data acquired from the HFTS in the Midland Basin, Texas, were utilized for analysis, model development, and validation.

Observations of core recovered at the initial HFTS field site revealed swarming behavior amid hydraulic fractures, meaning the fractures propagate in groups. This contrasted with traditional models that assume single fractures propagate from each perforation cluster of a fracture stage. Including these features in simulations presented significant computational challenges. In response, the geomechanics team at LLNL developed an accurate, yet efficient approach that predicts the propagation of swarms and has been adopted by industry.

NETL contributed to this multi-lab effort by leading coordination of access to the HFTS data in addition to coordinating the cataloging and imaging of the HFTS cores being used. The Lab also provided shale matrix permeability measurements and core flood experiments to provide direct data inputs for the model.

“NETL is performing fundamental R&D, and coordinating data and sample resources, to facilitate the fundamental geomechanical and geochemical inputs needed for the micro-to-reservoir scale modeling being performed as part of this project,” remarked NETL’s Jacqueline Alexandra Hakala.

The labs published a paper detailing their research, which was presented at the SPE Hydraulic Fracturing Technology Conference and Exhibition held in The Woodlands, Texas, in February. Based on this publication, Palo Alto, California-based software company ResFrac Corporation, incorporated the results into their hydraulic fracture simulator, ResFrac. The ResFrac software is now used by more than 30 exploration and production companies in major shale basins across North America.

“The team has been ecstatic to see how eagerly industry has adopted these results,” said Joe Morris, of LLNL. “This is just one example of the tangible value of DOE’s research.”

The upgraded model can yield many benefits to shale oil and natural gas producers by making it clearer how stimulation enhances permeability and how this will impact long-term production. Furthermore, the model can guide the optimization of engineering parameters (for example, fracturing stage design, fracturing fluid viscosity and pumping rate) for a specific reservoir.

Fundamental shale research has been one of the pillars of investigation for NETL and other national labs for many years. Although shale oil and natural gas had been produced domestically for decades, it was the advent of horizontal drilling technologies that made it economical on a large scale.

From the 1970s to the 1990s, several DOE-funded R&D technologies would optimize production of shale across the United States, tools that made the American shale revolution possible such as directional drilling, micro seismic monitoring of multi-stage hydraulic fracturing treatments and modeling. The new modeling technique in which NETL collaborated is an example of how the Lab continues to refine and improve domestic energy production.

“This is just one of many results that I am sure will be attributed from the research and collaboration of these national laboratories from this project,” NETL’s Joseph Renk said.