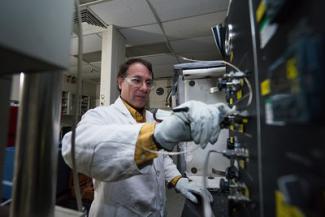 A robust partnership between NETL and industry partner Louisville, Kentucky-based Pyrochem Catalyst Company (PCC) continues to strengthen and could impact automotive power systems and the design of their harmful exhaust components.

Transportation, fueled by gasoline and diesel, remains a major source of mobile emissions, which include unconverted hydrocarbons, carbon monoxide, nitrogen oxides and particulates. A catalyst technology co-developed by NETL and PCC may provide a remedy.

NETL Chemical Engineer Daniel Haynes said the new pyrochlore catalysts are being developed to address the needs for new combustion-based automotive engines to meet the increasingly stringent fuel-economy and emissions standards. The new automotive catalysts need to be more active at lower temperatures to treat emissions from new combustion engine designs, which operate at cooler temperatures.

More importantly, the catalysts also need to treat emissions from a cold start-up, which is where 60-80 percent of emissions occur. The automotive industry has initiated the 150-degree-Celsius challenge for catalyst developers to innovate new and improved catalyst technology able to convert 90 percent of the pollutants (nitrogen oxides, carbon oxides, and unconverted hydrocarbons) at 150 C or below for 150,000 driving miles.

A novel pyrochlore catalyst patented by NETL can help treat the pollutant gases expelled by a vehicle’s internal combustion engine, which can lead to improved fuel economy while bringing combustion-based vehicles in line with more stringent emissions standards.

“Our pyrochlore catalysts show remarkable low temperature activity toward priority pollutants, thermal stability to 1,000 degrees Celsius under rich/lean burn cycles and, an exceptionally high oxygen storage capacity,” PCC Chief Technology Officer Jeffrey Harrison explained. “We reduced standard precious metal loading in these powders by 50 to 75 percent and they still exceed the efficacy of a conventional three-way catalyst for mitigation of harmful vehicle exhaust. We now have the results validated by two automobile manufacturers and a catalyst manufacturer. Our goal is a lower cost catalyst with performance that exceeds future emission standards.”

PCC has an exclusive license to the NETL automotive exhaust patent and is actively scaling up the process for producing pyrochlores for this application. However, PCC synthesizes the catalysts in powdered form, whereas catalyst companies and auto manufacturers employ a structured honeycomb tube, or monolith form that is representative of the commercial product.

This summer, NETL and PCC won a Technology Commercialization Fund (TCF) proposal to develop a catalyst coating technology for the catalyst for auto-company testing in their own systems.

TCF was created by the Energy Policy Act of 2005 to promote promising energy technologies developed at the national laboratories of the U.S. Department of Energy (DOE). TCF leverages research and development funding in applied energy programs to mature promising energy technologies with the potential for high impact. Only DOE facilities are eligible to apply to the TCF.

“Essentially, what the automotive industry wants is to dramatically reduce vehicle emissions,” Haynes said, “to do that, the industry needs to develop a technology that works at low temperatures and is able to remove harmful emissions over the full life of the automobile — the Pyrochlore catalyst has that capability.”

NETL’s pyrochlore technology was originally developed as a reforming catalyst for solid oxide fuel cell technology, which converts the chemical energy of a fuel into electricity.

Fuel cells do not emit pollutants and only emit water and carbon dioxide while producing electricity more efficiently than a combustion engine. NETL’s initial reforming catalyst could convert diesel fuel to synthesis gas- a mixture of hydrogen and carbon monoxide that would then be sent to a fuel cell auxiliary power unit in long-haul diesel trucks to provide electricity. This presented a means of addressing emissions and engine wear caused by idling when truckers leave their engines running overnight for air conditioning and other cabin comforts.

NETL has licensed all its pyrochlore catalyst technology exclusively to PCC, a start-up company established with financial support from the National Science Foundation and the State of Kentucky Cabinet for Economic Development. This occasion marked the first time an NETL-licensed technology formed the basis of a new company.

Haynes said the discovery of pyrochlores’ versatility to treat exhaust from the internal combustion process and the better chances of taking the technology mainstream through this avenue presented a fresh opportunity on which the Lab and PCC decided to act.

PCC conducts R&D and commercialization activities in Louisville, Kentucky with the goal of creating high-technology jobs throughout the region via the manufacture and sale of its pyrochlore catalyst materials. NETL continues to work closely with the company to refine pyrochlores for engine exhaust clean-up using the new patent and will use the TCF to further the commercial development of the catalyst technology.

“Our work with PCC stands out as one of NETL’s most important success stories, validating the good the Lab can do across the nation,” Haynes said. “Our Lab’s innovations didn’t just help an already existing industry partner, it led to the creation of one. But the journey didn’t stop there. The work of the Lab’s world-class scientists and facilities, along with its ability to forge lasting partnerships made these achievements possible. Together with PCC, we can’t wait to see what new heights we can reach.”

About PCC
PCC has developed a proprietary, scalable manufacturing process for catalyst materials in its facilities in Louisville, Kentucky. The company conducts R&D and commercialization activities with goal of creating highly effective catalytic materials for deployment in a number of industries, including automotive and reforming applications. PCC has brought high-technology jobs throughout the region via the manufacture and sale of its pyrochlore catalyst materials.