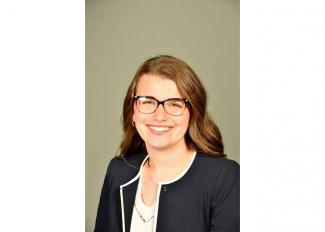 Through her work with NETL, native West Virginian Kristyn Johnson, a graduate student at West Virginia University, is working to enhance the operation of rotating detonating engines (RDEs) in support of the Lab’s mission to enhance the nation’s energy foundation in an economically viable and environmentally sustainable manner.

Growing up in Williamson, West Virginia, a small town on the Kentucky border, Johnson graduated from Mingo Central High School, where she took pre-engineering classes as part of a college preparatory program. She then enrolled at WVU, where her mother also attended, studying mechanical and aerospace engineering as an undergraduate before pursuing graduate studies in mechanical engineering.

“WVU’s dual degree undergraduate program let me pursue both mechanical and aerospace engineering in tandem. During my undergraduate career, I participated in summer internships in the aviation industry using skills from each discipline,” Johnson explained. “In particular, I worked in manufacturing and preliminary design of aircraft engines. Over those summers, I found that jet engines and gas turbines were the perfect marriage of my mechanical and aerospace interests. Fortunately, I was able to extend those interests further into a research setting by working in the WVU Turbine Cooling Lab and now in my work at NETL.”

Johnson said these experiences drew her to NETL’s RDE research. Andrew Nix, Ph.D. and her research advisor at the WVU Turbine Cooling Lab, introduced her to NETL.

Since joining the Lab under the mentorship of NETL’s Don Ferguson, Johnson worked to use computer vision and machine learning to develop a real-time diagnostic capability to determine the RDE’s modal operation, which is the number of detonation waves present and their respective directions when the engine consumes a fresh fuel-oxidizer mixture. However, processing conventional image processing techniques are very difficult for real-time diagnostics due the number of calculations necessary to consider each pixel through hundreds or thousands of images.

The solution pursued by Johnson and the NETL team is a two-part methodology. The first part is a computer vision method in which individual images are classified according to modal behavior by a convolutional neural network while the second part of the methodology aims to calculate detonation wave velocity in order to develop a more sophisticated diagnostic.

Both steps have been demonstrated independently and will act as a real-time diagnostic once integrated with the Lab’s data acquisition system. If optimized and deployed on a large scale, RDE technologies can offer advantages over conventional internal combustion engines such as greater power output, more efficient fuel use and fewer greenhouse gas emissions.

“The overarching goal of our work is to develop RDE technology for possible integration with gas turbines, resulting in more efficient power generation,” Johnson said. “As the combustion behavior within these devices is better understood, it’s important we simultaneously consider future steps necessary to the technology’s maturation.

“Development of a real-time diagnostic technique using computer vision will be very beneficial to our lab operations but will be most useful as RDEs progress towards industrial use. Leveraging recent progress in machine learning and ever-increasing computing power, we can adapt conventional machine vision practices to properly determine the modal behavior of supersonic detonation waves.”

Johnson and her NETL peers believe this capability will translate directly to future power plant operations as RDEs are incorporated with gas turbines to provide cleaner energy.

“During my time at NETL, I feel I’ve grown significantly as a researcher,” Johnson said regarding her experience at the Lab. “Working at a national laboratory has completely changed the way I view each stage of technology development. Working at NETL specifically has challenged my perspective on the importance of developing new techniques that capitalize on our natural resources in more reliable, environmentally conscious ways.”

In addition to her RDE technical work, Johnson has taken an active role in NETL’s science, technology engineering, and math (STEM) education and outreach efforts during the past year — something she says is very important for children to have in their lives growing up.

“Participating in STEM outreach and education efforts at NETL is one of my favorite parts of working here,” she said. “Our research is very important but getting to teach or maybe even encourage young students is such an incredible experience.”

Johnson’s dedication to inspiring the next generation can also be seen in her favorite scientist, Sally Ride, who became the first female American astronaut in the 1980s and continued to make contributions to the space program after leaving NASA.

“She used her platform to show kids that science is exciting,” Johnson said. “Through her legacy and organization, she is still teaching and inspiring young girls today, and will continue to do so for many generations to come.”