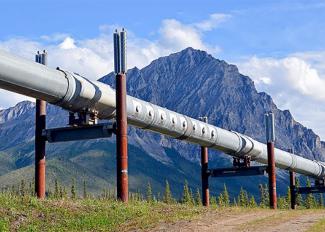 This month, NETL and its partners working on Alaska’s North Slope surpassed a major research milestone in the development of technology that could unlock access to significant resources of thick oil trapped in Arctic oil fields.

Injection of a benign polymer fluid to produce heavy oil from the Milne Point Field of Prudhoe Bay began in August 2018 as part of an NETL-supported field test. Two years later, the technology has not only demonstrated the ability to extract heavy oil, it also offers a promising solution to address production issues that have challenged energy companies working in the harsh Alaskan environment.

“The heavy oil resources on Alaska’s North Slope have been estimated at 25 to 30 billion barrels,” said NETL’s David Cercone, the federal project manager for the field test. “The technology we are advancing has the potential to support the Alaskan economy and contribute to a reliable domestic oil supply for many years.”

As defined by the U.S. Geological Survey, heavy oil is characterized by an asphaltic, dense, viscous nature and is similar in thickness to molasses. Thermal injection methods are used in many parts of the world to enhance oil recovery by injecting steam into the subsurface and moving the oil or gas toward the well.

However, thermal injections are not applicable on the Alaska North Slope due to high cost and concerns associated with thawing the permafrost.

NETL, which has a long, successful history of conducting and supporting research focused on enhanced oil recovery from conventional and unconventional oil fields, is addressing those challenges.

The Lab and its project partners, the University of Alaska Fairbanks and Hilcorp Alaska LLC, have combined polymers with water to create a gel-like fluid to inject into the oil reservoir and sweep oil toward production wells.

“Preliminary laboratory and simulation studies had indicated that polymer flooding had great potential to enhance oil recovery,” Cercone said. “This is an important step because prior to this project, no field test of this technology had been performed in Alaska. In fact, no large-scale polymer flood of a heavy oil reservoir had occurred in the entire United States, although it has been tested and implemented in other countries, such as Canada and China.”

In testing completed since 2018, the polymer fluid has demonstrated it possesses the properties required to push heavy oil and improve sweep efficiency toward wells. Other successes achieved in the first two years of the field test include:

Widespread application of the technology also will help ensure the economic viability and operational reliability of the 800-mile Trans-Alaska Pipeline System, which runs from Prudhoe Bay to Valdez, the northernmost ice-free port in North America. The pipeline is currently running at about a quarter of its design capacity.

In addition, knowledge gained through completion of the project will have far-reaching implications and could be useful in developing heavy oil fields in other regions.