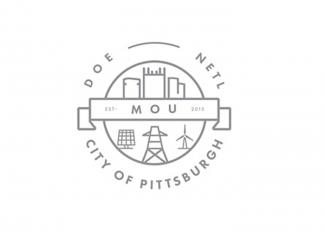 NETL and the City of Pittsburgh initiated a partnership in July 2015 to transform the city’s energy system and aging infrastructure by implementing a “grid of microgrids” concept that spanned nine energy districts. For five years, the City of Pittsburgh has provided an opportunity for NETL to demonstrate how advanced fossil energy technologies can support the safe, efficient use of energy and shape Pittsburgh into a “Clean Energy City of the Future.”

The city has taken steps towards this goal by committing 86.3 million square feet of building space to cleaner and more efficient energy use as part of the 2030 Districts project, working internationally with the Danish Ministry of Energy to collaborate on smart city technologies, earning more than 10 million dollars of funding to facilitate their innovations and more. You can read more about the City of Pittsburgh and NETL partnership here.

NETL envisions that this collaboration can serve as a model for other collaborations between the Department of Energy (DOE) National Laboratories and cities.

Successes stemming from this collaborative effort include:

The past five years of collaboration has brought about informative research studies, strong partnerships, innovative technologies and a community of regional organizations that leverage each other’s strengths to bring about positive change and transform Pittsburgh into a Clean Energy City of the Future. NETL and its collaborators continue to have groundbreaking plans for the Pittsburgh region in the years to come. Interested stakeholders should know that NETL is always open to expanding their collaborative community and welcomes connections to new parties dedicated to providing clean energy for Pittsburgh.

The list below provides in-depth explanations of specific accomplishments of the partnership between NETL and the City of Pittsburgh and the efforts that have led to its success.

Pittsburgh 2013 Energy Baseline
This study focused on 2013 consumption data for the City of Pittsburgh and surrounding regions for natural gas and electricity in the residential, commercial and industrial sectors. This consumption data is valuable to foster the development of systems that meet the unique needs of a metropolitan area at the lowest cost and with the greatest impact. Opportunities for energy usage and emissions reductions were identified, which include home heating energy savings and improving vehicle efficiency through the electrification of light-duty municipal vehicles and city buses. The Pittsburgh 2013 Energy Baseline report and accompanying brochure were released in 2017.

Pittsburgh-Danish Energy Exchange
In March 2018, the University of Pittsburgh and the Danish energy ministry signed an agreement to develop plans for implementing district energy infrastructure and smart city technologies in Pittsburgh. The partnership will leverage the Danish expertise in providing affordable, sustainable energy using integrated district energy systems with a focus on providing sustainable resources to underprivileged communities. NETL representatives helped discuss new research and approaches for helping Pittsburgh and Denmark in efforts to become global leaders in energy innovation and urban development.

Pittsburgh Energy Districts
Capitalizing on five existing energy districts and the city’s unique geographic features, NETL is working with Pittsburgh and regional partners to create a network of small-scale distributed energy systems that supply local residents with clean, reliable and cost-effective power. Rather than relying on a centralized grid supplied by distant facilities, these systems can operate independently or in conjunction with the main electrical grid and incorporate a diverse mix of energy sources, including advanced energy technologies pioneered by NETL and other national laboratories.

Pittsburgh’s focus on energy districts is based on the increasing global recognition of the value that district-scale energy systems can bring. Designing systems around the energy needs of a neighborhood or city allows developers to take advantage of local resources, infrastructure and other regional features. While these systems may require more engineering up front, they are highly efficient and often more cost effective than traditional technologies. NETL’s vision is to have a system of interconnected energy districts that work together to provide the city with clean energy.

Smart City Challenge
NETL was an active partner in supporting Pittsburgh’s pursuit of a $50 million Smart City Challenge grant from the U.S. Department of Transportation to improve regional transportation. Plans call for development of a full range of diverse transportation elements that improve air quality, develop new manufacturing related to smart traffic signals and tracking devices, and help to facilitate electric vehicle use. Pittsburgh, Pennsylvania, was a finalist in the Smart City Challenge, and on Oct. 11, 2016, the City of Pittsburgh received notice that it would receive a $10.9 million grant under the Fixing America’s Surface Transportation Act (FAST Act) due to its strong Smart City Challenge proposal. This grant is to be used to create “smart spines” that collect data through a network of sensors to help balance and move traffic through the city.

DOE Sunshot: Solar in Your Community Challenge
The DOE Office of Energy Efficiency and Renewable Energy (EERE) provided prize money through the Solar in Your Community Challenge to low-to-moderate income communities for developing community-based solar projects that have high potential for replication. NETL investigated opportunities and sought funding and technical assistance for these projects in collaboration with several nongovernmental organizations, the City of Pittsburgh and other partners.

Pittsburgh 2030 District
A strategic initiative of Green Building Alliance (GBA), 2030 Districts® were formed across North America and Canada to meet energy, water and vehicle emissions reduction targets for existing buildings and new construction. The Pittsburgh 2030 District, with boundaries in Downtown Pittsburgh and Oakland, has met and exceeded all three reduction targets: energy, water and transportation emissions. The Pittsburgh 2030 District has reduced its total energy and water consumption by 12.5% and 10.3%, respectively, surpassing its 2015 goal of 10%. It also reported a reduction in transportation emissions by 24.2%, exceeding its 2020 goal of a 20% reduction – five years early. The District, which collects and aggregates actual performance data from committed buildings within its two District boundaries, is the largest of 12 internationally recognized 2030 District cities and is the first to report that the incremental goals have been achieved and surpassed.

TAP toured and assessed three of the City’s existing combined heat and power/district heating resources: Duquesne University’s Cogeneration Plant, Clearway Energy’s North Shore Cogeneration Plant and the Pittsburgh Allegheny County Thermal (PACT) plant. The CHP TAP team’s initial analysis from the spring of 2016 was that the City of Pittsburgh had significant opportunity to utilize existing and planned CHP for increasing the resiliency of the City’s power grid.

DOE Pittsburgh Region Clean Cities Program
Nearly 100 local coalitions comprise the DOE’s Clean Cities program, which work to cut petroleum use in communities across the country. Each coalition is led by an on-the-ground Clean Cities coordinator, who tailors projects and activities to capitalize on the unique opportunities in their communities. The Pittsburgh Region Clean Cities works with vehicle fleets, fuel providers, community leaders and other stakeholders to reduce petroleum use in transportation. In Pittsburgh, the program supports the installation of alternative fueling stations and the acquisition of alternative fuel vehicles.