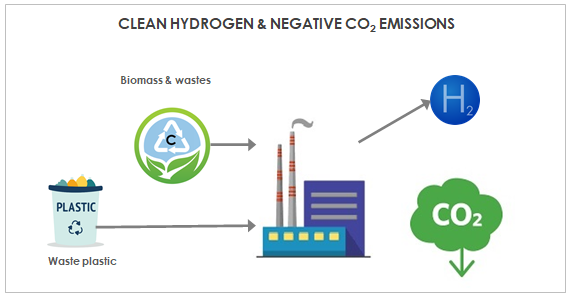 Philosophy
Interest in the concept of co-feeding biomass to fossil fueled plants including advanced gasification-based plants such as IGCC power plants, emerged from the idea that mixed feedstocks with biomass systems could become part of an early compliance strategy for carbon reduction, particularly across the large existing installed base of coal-based power plants. Recognizing that large biomass-alone power plants are constrained by low biomass energy density, feedstock water content, feedstock collection and preparation, and seasonal/regional feedstock availability, waste-biomass systems could benefit from the stability of a multiple feedstock mix, adding tractable amounts of biomass as constrained by technical/performance requirements and biomass availability.
Co-feeding biomass can reduce the carbon intensity of power generation and other fossil fuel consuming processes, but to achieve zero or negative lifecycle greenhouse gas emissions in these power plants some degree of carbon capture must be implemented. Gasification systems have the advantage considering that CO2 in typical syngas is much more concentrated and pressurized than the CO2 in the flue gas of combustion-based plants. Both concentration and pressure aid in separating CO2 from the syngas. Also, innovative modular gasification and water gas shift reactors afford opportunities for in situ oxygen production and gas separations which can facilitate or reduce the costs of CO2 capture.

Strategy
Thermochemical co-conversion cycles consisting of: 1) gasification-based electricity production with carbon capture and storage, and 2) long-chain hydrocarbon fuels production via gasification and the Fischer–Tropsch process (or alternatives) with carbon capture and storage, or both (polygeneration) have been strongly advocated as viable/accommodating process systems for a feasible commercialization strategy for carbon-negative energy. The NETL Gasification Program accords with this strategy with its recent efforts in modular gasification-based systems for power production, its work in syngas-based fuels production, and many projects in the portfolio considering biomass additions to the feedstock mix for greenhouse gas reductions in power generation and fuels production, and others considering techno-economic advantages of polygeneration systems. R&D of these systems should continue towards demonstration of technical feasibility at commercial scale and reduction of investment risk, which have been identified by the R&D community as key research and policy needs in carbon negative energy systems development.
In the biomass gasification field, moving bed or fixed bed gasifiers and fluidized bed gasifiers comprise the vast majority of gasifiers used, given their relative flexibility in handling varying feed streams and suitability to the sizes needed for typical applications. However, high-temperature, oxygen- or steam-blown, pressurized, entrained-flow gasification of multiple biomass-containing feed streams has been advocated as an important area of focus for R&D, considering the higher efficiency and reaction intensity of entrained gasification. NETL has begun to make inroads into this area as it supports R&D of high-pressure modular gasifiers (mainly entrained flow type), high-pressure feeding of lower quality fuels including biomass/waste blends, lower cost air separation for modular systems, and so on. The R&D strategy is to continue pursuing gasifier technology for higher efficiency gasification of waste/biomass blends and reduction of those technology costs. This will strongly enable negative greenhouse gas emissions technology in gasification systems.

Projects
In 2022, new projects were added to the program focusing on achieving overall cost reductions in clean hydrogen production from efficient gasification systems to make progress toward DOE’s Hydrogen Shot initiative’s cost goal of $1 per one kilogram of clean hydrogen:

Optimization of Coal Waste/Biomass Gasification for Hydrogen Production—Microbeam Technologies Incorporated is studying waste coal and biomass feedstocks properties and modeling slag/ash behavior to improve the ability to manage fluctuations in these feedstocks, thereby increasing availability and efficiency of gasifiers and driving down the cost of hydrogen.

A Mid-Century Net-Zero Scenario for the State of Wyoming and its Economic Impacts—In this project, The University of Wyoming is examining the economic impact of fossil energy production in Wyoming and providing various predictions for future energy mixes to achieve net-zero emissions, focusing on critical aspects to reduce carbon emissions and facilitating the deployment of a clean hydrogen industry.

Fact sheet about the U.S. Department of Energy's Hydrogen Shot, which seeks to reduce the cost of clean hydrogen by 80% to $1 per 1 kilogram in 1 decade.

Other key technologies within Gasification Systems include the following: