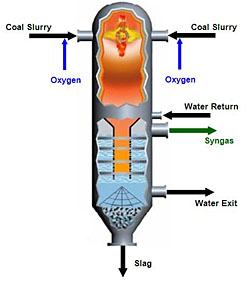 In the early 1990s, the Institute of Clean Coal Technology (ICCT) at the East China University of Science and Technology (ECUST) began its development of coal gasification technology in partnership with the Yankuang Coal Mine Group.

Operation
The ECUST entrained flow gasifier incorporates opposed multi-burner (OMB) technology, and a water-quench in a down-flow configuration. Operating conditions are dependent upon dry/wet feed, as well as the end product, but gasifier temperature and pressures fall in the range of 1,300 to 1,400°C, and 1 to 3 MPa.

The four injector/burner, coal water slurry gasifier depicted here is the version most in commercial use. The gasifier features four burners located around the top of the gasifier spaced at 90° intervals from each other forming two pairs of opposed burners. This configuration permits equal, flexible control of large amounts of coal slurry and the impinging flow facilitates mixing of the reactants. Other features of this gasifier include:

A pulverized, dry coal feed, single stage gasifier with the burner/injector centrally located at the top of the gasifier discharging downward into the reactor is in ongoing development. Its use has been reported in two demonstration projects in construction, each with two gasifiers operating at 4.0 MPa with a feed capacity of 1200 tons per day. Other significant developmental activities with the potential to impact the commercial coal conversion marketplace include:

Thirty-one coal projects have been identified in China that utilize an estimated total of 88 ECUST OMB gasifiers, having coal feed capabilities ranging from 750 to 3,000 tons per day. Of the 31 projects, 10 are in operation, 8 are under construction and 13 are in development. The principal products of the plants utilizing ECUST OMB gasifiers include ammonia, methanol, dimethylether, liquid fuels from coal, hydrogen, and electricity from IGCC systems.

Outside of China, ECUST has sold a technology license to Valero, the largest refinery enterprise in the United States. The Valero project (at Valero Energy’s Port Arthur refinery) is planning for the use of 5 gasifiers, each with a capacity of 2,500 tons per day. The gasifiers would be used to generate hydrogen through the gasification of petroleum coke.