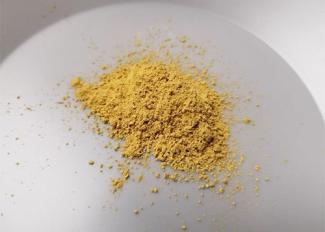 The U.S. Department of Energy (DOE) prioritized the creation of a domestic supply of rare earth elements (REEs), and one of NETL’s supported projects that may provide these vital resources using the nation’s abundant coal supplies has demonstrated favorable results.

As part of an NETL-funded cooperative agreement, researchers from the University of Utah and Virginia Tech evaluated a new, low-cost technology to extract and recover an enriched, mixed REE oxide (REO) product from coal-based resources. The project team successfully obtained six different coal waste samples with REE concentrations that exceeded the project’s requirement.

The subsequent technology evaluation began with selectively separating resources from coal waste, followed by passing bio-oxidized and conditioned solutions over columns of coal (or heap leaching). The REEs resulting from this process were concentrated by solvent extraction, a method utilized to separate compounds or metal complexes, and recovered via precipitation, which is the process of producing solids from a solution.  The project was undertaken with the goal of achieving a 2-8% by weight mixed REOs product, but far exceeded the goal with the successful production of 36.7% mixed REOs equivalent by weight.

“We’ve known for quite some time that rare earth elements can be extracted from a variety of coal products, but one of the ongoing challenges to creating a domestic supply chain from this resource has been the extraction at an acceptable cost,” said Anthony Zinn, of NETL’s Enabling Technologies & Partnerships Team. “The fact that this project surpassed its goals is an accomplishment. The task now is to follow up and continue exploring ways to drive down costs and make the process economical.”

Throughout this project, the research team successfully demonstrated several concepts such as the separation technologies to enrich pyrite for bio-oxidation; column leaching with bio-oxidation and extraction of REEs; concentration of REEs by solvent extraction; and iron removal along with REE recovery by precipitation. Each of these technologies, when combined in an appropriate series, allow for the production successfully demonstrated in the project.  These demonstrations can also pave the way for further extraction and refinement developments.

A very promising techno-economic evaluation was also carried out. The experiments and analyses led to the important finding that separating coal refuse using available technologies (e.g., dual-scan X-ray sorting, comminution, and spiral concentration) to concentrate pyrite-rich coal,  which can feed a bio-oxidation reactor, decreases acid consumption during heap leaching, thereby improving the economics of the process and making it more attractive for further development.

These accomplishments illustrate the feasibility of not only recovering the economic and strategically vital REEs from the nation’s coal resources but doing so at low-cost, which is a crucial step on the road to commercialization. If lowering the costs of extracting and refining REEs in satisfactory quantities and purity can be achieved, it can incentivize further investment by industry.

NETL remains committed to lowering these costs by funding and managing select projects with academia and private industry throughout the nation. The work conducted by the University of Utah and Virginia Tech stands as an example.