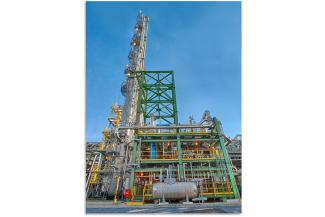 As a testbed for new innovations on the road to commercialization, the National Carbon Capture Center (NCCC) has proved vital to NETL’s work in developing technologies that lower carbon dioxide (CO2) emissions from the nation’s coal and natural gas power plant fleet. The Lab’s Research and Innovation Center developed transformational solvent, sorbent, and membrane carbon capture technologies and the NCCC could provide critical industrial-scale testing. For example, NETL used its revolutionary computational framework to screen more than a million mixed matrix membranes (MMM) and to identify promising MMMs for post-combustion carbon capture. These membranes are now being scaled up for demonstration at the NCCC, advancing their commercial feasibility.

Lowering the cost of capture remains a priority goal for the U.S. Department of Energy’s (DOE) Office of Fossil Energy (FE). By supporting NETL and crucial facilities such as the NCCC, FE continues to pursue its carbon capture objective of 95 percent CO2 purity at a cost of $40/tonne of CO2 captured in advanced coal-fired power plants by 2025. DOE aims to lower that cost further to less than $30/tonne of CO2 captured by 2035. NETL and the NCCC are crucial partners in reaching these objectives.

The Lab and NCCC celebrated a decade of technology development in 2019, with many of NETL’s extramural carbon capture projects tested on actual coal-fired flue gas and syngas from an operating gasifier. During the past six years, DOE has committed $166 million to fund testing of various post-combustion, pre-combustion and gasification projects managed by NETL.

One of the greatest challenges to reducing global carbon emissions from the power generation and industrial sectors is cost. As the NCCC continues to validate new innovative technologies, its goal, like that of NETL itself, is to lower the cost of carbon capture technologies to incentivize the adoption of these technologies for large scale deployment, thereby maximizing the benefit of the nation’s vast fossil energy resources. The importance and benefit of this mission will only grow as new extraction technologies make available bountiful deposits of natural gas and oil that were once out of reach, such as the Marcellus and Utica shale basin.

As the world’s energy industries strive to lower CO2 emissions without raising cost, the NCCC serves as a cost-efficient test site with supporting infrastructure for technology developers. It offers flexibility for testing at multiple scales, real-world testing conditions with high-quality data acquisition for sampling and analysis, and technical staff for design, installation and testing support.

Located in Wilsonville, Alabama, at the site of the Power Systems Development Facility, originally established by DOE in 1995 as the premier advanced coal power generation research facility in the world, the NCCC has continued its legacy of innovation since its creation in 2009. The facility works to accelerate the commercialization of advanced technologies to reduce greenhouse gas emissions from both natural gas and coal power generation.

“From a small lab concept to a bench scale project and on to a full-scale facility, the National Carbon Capture Center serves as a solid example of what’s possible when intelligent, dedicated people are focused to providing emission reduction solutions to realize America’s energy security,” NETL’s Carbon Capture Team Supervisor José Figueroa said.

Since it began operations in 2009, the NCCC has completed more than 110,000 hours of field testing of over 60 technologies from carbon capture innovators that has led to significant advancements, process enhancements and technological breakthroughs. Enzymatic solvent systems, sensors for gasification operation, novel solvent regeneration methods, and advanced emissions monitoring are among the examples of systems tested at the NCCC.

Managed and operated by Southern Company Services (SCS) on behalf of DOE, the NCCC is an original member of the International Test Center Network (ITCN), a global consortium of test facilities in the United States, Norway, Australia, Canada, Germany, and the United Kingdom dedicated to research and development (R&D) of carbon capture technologies.

“The NCCC truly is a world class facility and it has the track record to back up that claim,” Figueroa said. “This is evident with the extensive global roster of international organizations that have conducted tests at the NCCC, such as Aker Clean Carbon, BASF/Linde, Cansolv, Carbon Clean Solutions, Chiyoda, Hitachi, MHI, and the University of Edinburgh. The NCCC’s unique capabilities were globally recognized in 2016 when they assumed the chairmanship to guide the ITCN mission for two years.”

The NCCC leadership continues to promote and facilitate testing and knowledge sharing of carbon capture technologies to reduce technology risk for accelerated deployment in the power and industrial sectors to maintain energy security with a lower environmental footprint. To keep this momentum going, the Lab and SCS are looking to partner for another five years with anticipated costs of $140 million in funding ($112 million from DOE and $28 million in cost share) during that time to support testing advanced post-combustion carbon capture technologies and CO2 utilization technologies at the NCCC.