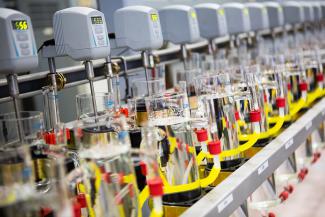 NETL-supported research to secure a domestic supply of rare earth elements (REEs) shows economic potential regarding efficiency and cost savings and progresses along the pathway to commercial viability.

The Lab has funded and supported multiple projects across the nation to extract REEs from coal and coal-related byproducts. A notable example is coal acid mine drainage (AMD) and sludge originating from abandoned or still operating mines. However, NETL and its partners are making progress refining a method to clean up AMD in order to extract the vital REEs needed for the U.S. economy to stay competitive on the global market while providing environmental remediation.

This sludge is enriched in REEs and contains an average total REE content several times higher than raw, untreated AMD. However, separating the valuable REEs can be very expensive.

With its dedicated Rare Earth Extraction Facility on campus supported by NETL, researchers at the West Virginia University (WVU) Research Corporation, aided by its partnership with West Virginia Department of Environmental Protection, may have solved this problem. They evaluated the potential of precipitating (that is, causing solid constituents to be physically separated out) REEs upstream of the AMD treatment stage.

The WVU team evaluated extracting REEs from acidic AMD and net-alkaline AMD streams using electro-membrane extraction and other methods, and the precipitates (solids) from this concentration method were then further processed. Their results showed that although the total REE concentration in raw AMD is significantly lower than AMD sludge, target REE oxide purity levels ranging from 60 percent to 98 percent from acidic AMD could be achieved.

An analysis compared the two potential REE production scenarios (i.e., from the AMD sludge and from the upstream, raw AMD REE concentration process developed in this project). The results showed that the upstream concentrator increases the grade of the REE feedstock, reduces acid demand, and reduces processing costs.

The techniques tested at WVU showed that nearly 100 percent of all the REEs in the raw AMD or sludge can be recovered, a significant development toward realizing commercialization.

“By utilizing the naturally-acidic, raw AMD instead of AMD sludge, target REE oxide purities can be recovered while lowering the costs of extracting them,” explained NETL Project Manager Jessica Mullen. “This is a significant step forward to encourage further investment and to show that a domestic supply of rare earth elements is feasible.”

Several presentations have been made at professional meetings, a patent application was generated, and a new project for a pilot-scale REE separation facility has begun.

“The outcomes of this project have demonstrated enough viability to warrant further research,” Mullen said. “Given enough time, acid mine drainage and the promise of harvesting its rare earth elements could present tremendous opportunity. You might one day see a new industry dedicated to the dual task of environmental cleanup and extracting these valuable minerals.”