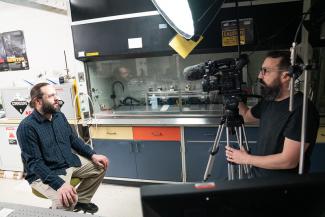 Advanced NETL technology that will enable power plants to operate at higher efficiencies and use less fuel while producing the same amount of energy has been selected to receive a prestigious award from Pittsburgh’s Carnegie Science Center.

NETL researchers won in the Innovation in Energy category for their investigation of the use of single-crystal optical fibers capable of measuring numerous environmental parameters anywhere the fiber is installed — including the extreme environments of power generation systems. Award recipients were announced March 10 at a VIP reception. Awards will be presented at a May 8 celebration in Pittsburgh.

To run a power plant with greater efficiency, it is critical to take measurements of numerous environmental parameters, including temperature, strain, and chemical composition. However, these measurements can be extremely difficult to obtain because conventional electric sensors can’t survive long in the extremely harsh environments present in most fossil or nuclear generation facilities.

To create more durable sensors, the Laser and Optical Processes Team (LOPT) at NETL built a machine known as a laser-heated pedestal growth (LHPG) system. The system enables researchers to fabricate custom single-crystal optical fibers from bulk materials, such as sapphire or yttrium aluminum garnet, that can withstand ultra-high temperatures.

Because the single-crystal fiber sensors can provide sensory information all along their length, longer strands are much more advantageous than shorter lengths. Recently, LOPT researchers discovered a new means of controlling the LHPG system that permits the growth of single-crystal fibers of theoretically infinite length. The LOPT has grown what is believed to be the world’s longest sapphire optical fiber, which measured more than 20 meters in length.

NETL’s technology could significantly improve the efficiency and reliability of fossil energy plants. For instance, a traditional thermocouple for temperature sensing can cost around $2,000 and may only last a couple weeks, but NETL’s single-crystal fiber optic sensors are far less costly and could survive in the same environment for six months or longer.

“By installing these long fibers in a reactor or combustor, plant operators can achieve unprecedented levels of tuning and control. Using these fibers to ‘see’ within the world’s harshest environments allows energy-generating technologies to operate at higher efficiencies and use less fuel,” said NETL Director Brian Anderson.

Furthering this critical research is NETL’s highly skilled team of experts in harsh-environment sensors. The team includes some of the nation’s top energy researchers, including Michael Buric, Ph.D., a research scientist at NETL’s Research and Innovation Center, and recipient of an esteemed Society of Photo-optical Instrumentation Engineers (SPIE) Rising Researcher Award for his accomplishments in single-crystal fiber structures.

Aside from the LOPT’s extensive work in single-crystal fibers, the team’s record of developing other technologies to enhance nation’s energy foundation is well established. The team’s patent base largely comprises patents for energy efficiency and pollution reduction. Several of these patents have been licensed and are currently being employed in the energy industry.

The LOPT’s major advancement in single-crystal fiber production is currently under provisional patent as it moves through the United States Patent and Trademark Office. The innovation has drawn significant interest from the U.S. military for use in high-energy lasers in missile defense systems.

The Carnegie Science Awards program, now in its 24th year, honors and celebrates innovators in 16 categories for outstanding scientific and technology achievements that benefit western Pennsylvania and inspire the next generation.