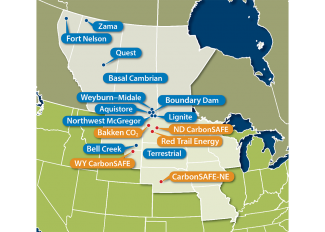 The carbon footprint created by industry and other human activity in Big Sky Country — the area stretching across the Great Plains and into Canada — can be reduced using technology pioneered by NETL and partners at a leading research university.

Work completed as part of the NETL-backed Plains CO2 Reduction (PCOR) Partnership demonstrates not only the ability to reduce carbon dioxide emissions, it also enhances the efficiency of oil production, an important consideration to bolster domestic energy production.

PCOR is one of the U.S. Department of Energy’s (DOE) seven Regional Carbon Sequestration Partnerships (RCSPs), which have been laying the groundwork since 2003 for large-scale geologic storage of CO2 in the United States as a means of mitigating effects of climate change while still allowing for the efficient and affordable use of fossil fuels for energy production.

The Energy and Environmental Research Center (EERC) at the University of North Dakota leads the PCOR Partnership. Throughout its history, PCOR has engaged a membership of more than 120 partner organizations drawn from industry, government and research institutions to foster carbon capture, utilization, and storage (CCUS) deployment across a vast region.

The positive environmental impact of PCOR is significant. Stretching from Missouri through the northern Great Plains to northcentral Canada, this region possesses outstanding potential for widespread CCUS deployment because it has significant geologic storage resources and an extensive fossil fuel-based industry. Furthermore, several active CCUS projects in the region are already setting an example for future work by demonstrating safe and effective carbon management strategies with attendant economic benefits.

Another key achievement of the PCOR Partnership was its assessment and monitoring of more than 6 million metric tons of CO2 storage associated with the enhanced oil recovery (EOR) operations, which inject captured CO2 into oil reservoirs to increase production, at Denbury Resources’ Bell Creek oilfield in southeast Montana.

At the oilfield, EERC scientists deployed a wide variety of traditional and novel monitoring technologies and assessed their relative strengths and limitations. Through a combination of techniques, the scientists were able to reliably track the location of the injected CO2 within the oilfield, which inspires confidence in the future ability to permanently and safely store large quantities of anthropogenic CO2 from industrial operations. Other advantages of storing CO2 in EOR operations are the ability to extract oil that could not otherwise be obtained and reduce the overall carbon footprint of the oilfield operation.

In addition to the work at Bell Creek, EERC and its partners have provided important scientific and technical support to other large-scale CCUS efforts in the PCOR region, such as the Boundary Dam/Aquistore projects in Saskatchewan and the CarbonSAFE efforts in North Dakota, Wyoming and Nebraska.