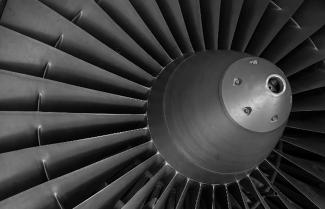 A new NETL study identified strong opportunities for global export of high-performance materials that are used in power plants and the aerospace industry – exports that could mean increased demand for U.S. goods and services and positive impacts for the U.S. economy.

The report, “Assessing the Export Potential for High-Performance Materials,” examined the export potential and economic impacts resulting from both the primary and potential secondary applications of NETL high-performance materials (HPM) research. The research specifically assessed the potential international demand for HPMs in advanced ultra-supercritical (AUSC) and natural gas combined cycle (NGCC) power plants, as well as the aerospace sector. The study estimated the potential economic impacts within the U.S. associated with estimated HPM exports in each market.

NETL analyses typically focus on the benefits of domestic deployments of the Lab’s advanced power generation technologies, but substantial opportunity exists for NETL’s knowledge and technologies to be exported globally. According to the NETL report, potential markets are large and could support a significant number of jobs and a significant amount of income if the U.S. successfully becomes a global leader in HPMs and products that contain them.

Erik Shuster, of NETL’s Systems Engineering and Analysis team, said the exact value of the impacts will depend on the commercial market penetration of the technologies and how much of each international market the U.S. is able to capture.

As noted in the report, the European Union, China, India and Japan are all regions that will likely see deployment of AUSC power plants, while Europe and Asia are likely to be large export markets for aerospace products made with U.S. high-performance materials.

Natural gas, combined cycle power generation, produces electricity from two sources of energy: combustion of natural gas in a turbine and use of the turbine exhaust to make steam. Energy from both sources drive turbines and generators to produce electricity. NGCC plants are about 30 percent more efficient than traditional steam plants.

Advanced ultra-supercritical refers to systems capable of operating at or above 760 degrees Celsius in the U.S. or above 700 degrees Celsius in the European Union, Japan, China and India. AUSC power technologies have the potential to increase efficiencies and bolster clean coal efforts. Because these systems operate at higher temperatures and pressures leading to more corrosive and harsher environments than traditional power plants, AUSC power technologies require alloys and high-performance materials suitable for these extreme environments.

NETL’s research in HPMs accelerates the development of improved steel, superalloys and other advanced alloys that address challenges of both the existing fleet and future power systems. NETL advances a robust domestic materials supply chain that prepares materials for AUSC and spinoff applications. NETL’s Advanced Energy Materials program funds research and development in HPMs including high-temperature alloys, materials with better corrosion resistance, and materials with better high-temperature creep strength, to lower the cost and improve the performance of fossil-based power generation systems. The attributes of the NETL-developed HPMs make them potential candidates for use in international aerospace, mining, electronics, and medical equipment markets.