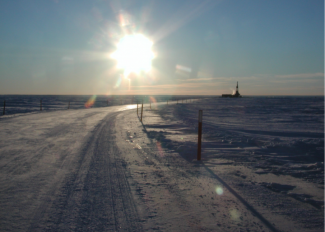 NETL will expand its work to determine the production feasibility of natural gas hydrates in Alaska through an international cooperative research effort and continued work with sister U.S. Department of Energy (DOE) national laboratories.

Gas hydrates are naturally occurring combinations of natural gas and water that form in specific conditions of relatively cold temperatures and relatively high pressures. They are known to occur in abundance in northern Alaska, as well as in the shallow sediments of deepwater continental margins around the world, including well-documented deposits in the Gulf of Mexico and off the southeastern coast of Japan.

Alaska is the only location in the world where gas hydrate recoverability can be feasibly tested and monitored over the desired timeframes. Alaska’s North Slope holds an estimated 85 trillion cubic feet of technically-recoverable gas in hydrate form according to the USGS. The location of the proposed test site in the greater Prudhoe Bay oil field provides the necessary infrastructure to conduct field experiments to reveal how gas hydrates release natural gas in response to reservoir depressurization. Such long-term testing cannot be feasibly done either offshore or in an undeveloped Arctic area onshore.

NETL along with the U.S. Geological Service USGS and DOE national laboratories, has been working on estimating gas production potential from hydrate reservoirs on Alaska’s North Slope. The Japan Oil, Gas and Metals National Corporation (JOGMEC) is engaged in a wide range of activities to increase recoverable resources through advancement of state-of-the-art technological development, taking on technological challenges in methane hydrate and other new areas of resources and energy, with emphasis on the preservation of environment.

Last year, NETL — in cooperation with the Prudhoe Bay Unit owners and in partnership with the JOGMEC, USGS, and Petrotechnical Resources-Alaska — successfully drilled and logged an initial test well in the greater Prudhoe Bay oil field. The work is a part of collaboration that confirmed the occurrence of gas hydrates in two high-quality reservoirs that are suitable for future testing to determine hydrate recovery feasibility. .

The deeper reservoir, at about 54 degrees Fahrenheit, could provide optimal conditions for reservoir experiments. The shallower reservoir, at approximately 40 degrees Fahrenheit, could accommodate testing of gas hydrate production response. The drilling also produced core samples used to conduct geomechanical, hydrological, and thermal property tests. The well completion will serve as a future monitoring using of temperature and acoustic sensors.

NETL’s hydrate modeling team will begin a second collaboration with JOGMEC to conduct numerical reservoir simulations to predict production rates of water and gas because new data from more recent field tests has become available. The results of the simulations will be the key input for designing and executing the long-term production test planned for early 2020.

The United States and Japan worked together to conduct gas hydrate research in Canada in 2002, 2007, and 2008; Alaska in 2007 and 2012; and offshore Japan in 2013 and 2017. The work of the United States and Japan has confirmed the occurrence of gas hydrates in both the U.S. and in Japan, identified many technical details of its occurrence and nature, and demonstrated the technical feasibility of producing natural gas from the reservoirs.