The goal of the project is to develop a hydraulic fracturing test bed to develop, characterize, and test fracturing techniques for the purpose of increasing natural gas recovery and improving development economics.

This project supported the construction and operation of the Fracture Fluids Characterization Facility (FFCF) on the campus of the University of Oklahoma in Norman, Oklahoma. The facility contains the High Pressure Simulator (HPS), which provides industry with a means to better understand the behavior of fracture fluids and their proppant transport characteristics under conditions representative of the downhole gas/oil reservoir environment. The HPS shown below simulates the conditions experienced by a fracturing fluid from its formulation on the surface, its flow down the wellbore, through perforations, its injection into the fracture, and its leakage into the rock formation. The FFCF also houses onsite auxiliary equipment such as a mixing and pumping system, a pre-conditioning system, a data acquisition system, and rheology measuring system. Together, these systems represent the most advanced fracture simulator available to industry for conducting research that mimics actual field conditions. 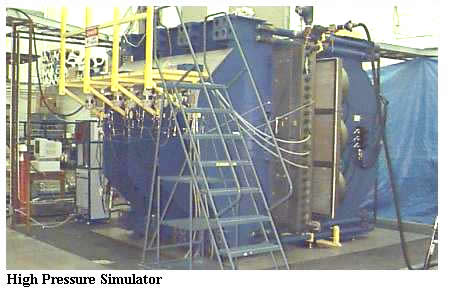 The major goals of the project were to develop a fracture simulator that provides an accurate rheological characterization of hydraulic fracturing fluids under field conditions and to provide a permanent facility that could be used by the industry for testing purposes. The University of Oklahoma has successfully accomplished both of these goals. The “Fracturing Fluid Characterization Facility (FFCF)” was established with total commitment from Oklahoma University (OU). The primary objective of this facility is to provide the oil and gas industry with a comprehensive, research-based organization, whose mission is to provide valuable insight into the various mechanisms that govern the flow of fracturing fluids and slurries through a hydraulically created fracture.

Hydraulic fracturing is the key element of a strategy that is often applied during completion of gas wells to obtain maximum rate of return on investment. Capabilities developed at the FFCF allow the complex chemical, physical, and fluid flow processes that occur during hydraulic fracturing to be simulated for the first time on a scale comparable to that found in field operations. Using these capabilities, the FFCF has experimentally investigated many of these processes to increase industry knowledge concerning how they impact the overall efficiency of a fracturing treatment. Because hydraulic fracturing is so widely applied, small incremental improvements have the potential to produce an enormous impact on the overall economics of gas recovery.

A state-of-the-art laboratory where fracturing fluid characterization can be performed was also established. Joint industry consortia, such as the Coiled Tubing Consortium, were established and a technical program was developed to make the facility available to the industry in the form of third-party testing. Since 1996, the industry has utilized the FFCF testing facility to perform fluids-related research.

Some of the numerical simulators used today for simulating hydraulic fracturing treatments have incorporated the data developed by the FFCF. The research and development work thus far accomplished at FFCF will not only serve as the foundation for future research but has also provided the industry with valuable insight into some of the more fundamental aspects of fluid flow in a hydraulic fracture.

Design of a prototype HPS began in 1991 and construction was completed in mid-1993. Acceptance testing in late 1993 resulted in design modifications that were incorporated into the HPS that is operational today. Completion of the FFCF building was marked by an open house ceremony in April 1997. DOE funding subsequent to the construction FFCF supported a of comprehensive, multi-year research program to evaluate and characterize the rheology of hydraulic fracture fluids and the transport and performance of propping agents.

The HPS is now the anchor of the Well Construction Technology Center, located at the University of Oklahoma. This multi-million dollar research facility, co-sponsored by DOE, the Gas Technology Institute (formerly, the Gas Research Institute) as well as the University of Oklahoma and its subcontractors, offers industry a setting for testing hydraulic fracturing fluids has been in operation since 1993.