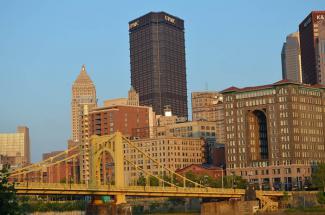 With technical support from NETL, the City of Pittsburgh has drawn national attention for the strides it is making in becoming an energy Smart City. Now, through a partnership involving the University of Pittsburgh and the City’s Office of Resiliency, NETL is participating in a new international effort to broaden thinking about energy innovation and urban development.

The University recently signed a partnership agreement to collaborate with the Danish Ministry of Energy, Utilities and Climate Change to exchange ideas and plans for implementing district energy infrastructure and smart city technologies. During a special invitation-only workshop at the University of Pittsburgh’s Energy Innovation Center today and tomorrow, NETL representatives will help discuss new research and approaches for helping Pittsburgh and Denmark in efforts to become global leaders in energy innovation and urban development.

Copenhagen is Denmark’s capital and sits on the coastal islands of Zealand and Amager. Like Pittsburgh, its economy has seen rapid development in the service sector, especially through initiatives in information technology, pharmaceuticals, and clean technology.

NETL has supported the City of Pittsburgh’s energy initiatives ever since signing its own memorandum of understanding with the city in 2015. With NETL support, Pittsburgh attracted a U.S. Department of Transportation a $10.8 million Fixing America’s Surface Transportation Act grant to implement a variety of intelligent systems technology. NETL supported the city’s Smart City Challenge Grant initiative that helped it become recognized as a leader in U.S. Smart Cities initiatives.

Another project that grew out of the partnership is a plan to build upon the city’s existing electrical grid and district energy systems for a “grid of microgrids” approach – a network that adapts and connects distributed energy resources. Distributed energy systems are smaller-scale, modular, electric and thermal energy-generation and storage devices like combined heat and power, gas turbines, microturbines, wind turbines, PV solar, batteries, fuel cells and geothermal.

According to NETL representatives, this week’s workshop will bring a variety of domestic and international experts together to discuss where the two countries are in energy planning, what lessons can be learned from each other, and begin planning a roadmap for implementation of new energy system designs.

By assisting Pittsburgh and its latest international initiative through the Denmark partnership, NETL is helping to fulfill its mission to discover, integrate, and mature technology solutions to enhance the nation’s energy foundation and protect the environment for future generations.