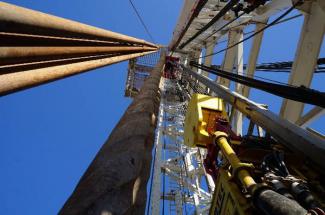 Fracturing—the process of creating pathways through rock formations to enhance the flow of oil or gas into a wellbore—has come a long way since early innovators used nitroglycerin to stimulate shallow wells in the late 1800s. In the 21st Century, advances in hydraulic fracturing in shale plays ushered in a new oil and gas boom. But, there is much more to discover and innovate if producers are to maximize efficiencies and increase environmental safety.

Despite a long history of hydraulic fracturing, fundamental questions about fracture growth, its interaction with natural fractures, and fracture efficiency for production enhancement remain unanswered. According to researchers, fracturing of horizontal wells is often more a hit-and-miss proposition than an engineered, predictable procedure. Usually, only a few of the hydraulic fractures created in an extended reach horizontal well contribute to the bulk of gas flows with low production from the remaining fractures.

The NETL–GTI program, which began in October 2014, has made progress in improving the design and execution of fracturing processes that will reduce the number of infill wells to be drilled, water used, and the energy input required during future oil and gas recovery activity.

In August 2015, Laredo Petroleum provided a field site for the NETL-GTI project in Reagan County, Texas, that included 11 existing horizontal wells. Prior to and after hydraulic fracturing operations, researchers with GTI conducted seismic surveys, which produced images of the subsurface geology; collected water and air samples; and undertook microseismic monitoring, to detect very small-scale earthquakes that occurred as a result of industrial processes. In addition, researchers used special tracers to study the distribution of proppant (the material used to keep hydraulic fractures open).

The air quality data and analysis indicated little to no increase in toxic air quality compounds during fracturing and production operations at the test site. In addition, there was no evidence of natural gas or produced water migration to the groundwater aquifer. Microbial analysis is ongoing for produced water samples collected in July. Onsite researchers will continue to collect pressure and temperature information and produced fluid samples for oil and water tracer detection from producing and core wells.

The net effect of the efficiency improvements this research will help attain will increase production from wells with no increase in the amount of water, chemicals, proppants, and energy required. In addition, the results and data collected during this project will be used by industry for many years for exploration and development of different shale formations.

The work is an example of how NETL pursues its mission to discover, integrate and mature technology solutions to enhance the nation’s energy foundation and protect the environment.