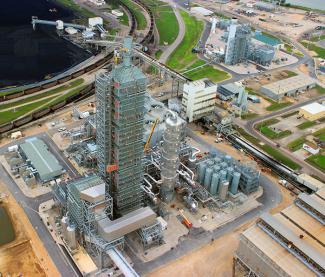 The Petra Nova project, located at NRG’s W.A. Parish power generating station near Houston, has been successfully demonstrating an advanced amine-based CO2-capture technology that removes 90 percent of the CO2 emitted from a flue gas stream. The project began commercial operations on January 10, 2017. On April 13, 2017 Secretary of Energy Rick Perry attended a ribbon cutting ceremony for the project, where he noted that Petra Nova “demonstrates that clean coal technologies can have a meaningful and positive impact on the Nation’s energy security and economic growth.”

At 240 megawatts, the project is a joint venture between NRG Energy and JX Nippon Oil and Gas Exploration Corporation, and received support from the Department of Energy. It uses a process jointly developed by Mitsubishi Heavy Industries and the Kansai Electric Power Co. which utilizes a high-performance solvent to separate the CO2 from the flue gas produced by conventional coal combustion. The CO2 captured from Petra Nova is used for EOR at the West Ranch Oil Field, which has increased oil production from 300 barrels per day when it began operations to about 4,000 barrels per day today.

Petra Nova was selected as POWER magazine’s plant of the year for 2017.