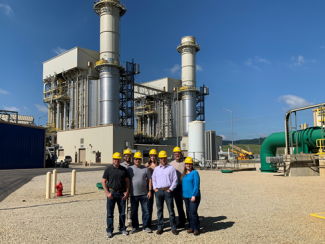 The U.S. Department of Energy Office of Fossil Energy and Carbon Management/NETL Point Source Carbon Capture (PSCC) Program is developing the next generation of advanced carbon dioxide (CO2) capture concepts to support the United States in achieving ambitious goals for a greenhouse gas (GHG)-neutral economy by 2050, a carbon-pollution-free power sector by 2035, and a 50% reduction from 2005 levels in economy-wide net GHG pollution by 2030.

The PSCC Program is accelerating commercially deployable solutions that can be applied to a wide spectrum of CO2 emissions sources, including facilities that produce power, hydrogen, ethanol, cement, or steel. Projects range from conceptual engineering and materials design at laboratory and bench scale to large-scale testing and front-end engineering and design studies to lower both capital and operating costs and improve the economics of PSCC.

To gain more hands-on experience, the team traveled to view a number of carbon capture approaches in practice in Kentucky.

The first stop was at Ghent, Kentucky to visit the Nucor Steel Gallatin Plant. Nucor will be the host site for the application of the University of Kentucky’s transformational, three ton per day CO2 capture system to treat emissions from the electric arc furnace. The Point Source Carbon Capture Team saw the electric arc furnace, ladles, ducting, bag houses and the proposed capture unit site.

Next, the team visited the Center for Applied Energy Research (CAER) in Lexington, Kentucky for a presentation by the University of Kentucky’s Kunlei Liu, Ph.D., which compared similarities and differences between carbon capture and wet flue gas desulfurization. The presentation was followed by a tour of the CAER facilities, which include a greenhouse and algae bioreactor, a gasifier, and a lab-scale carbon capture test unit which was constructed in 2008 for testing on gas streams generated by coal and natural-gas combustion.

The NETL team also toured the Louisville Gas & Electric Kentucky Utilities (LG&E KU) E.W. Brown Generating Station. There, the DOE representatives saw a solar farm with pollinator habitats and a sheep herd for sustainable site maintenance, a 1 MWe lithium energy storage plant, a simple cycle natural gas-fired power plant, a coal-fired power plant, and the 2 MW-thermal engineering-scale University of Kentucky CAER carbon capture facility, which is part of an NETL-sponsored cooperative agreement. The carbon capture facility was constructed in 2015 to capture 12% CO2 from coal-fired flue gas and has since been used for thousands of hours of testing with a variety of solvents. The facility was also converted to a membrane-solvent hybrid carbon capture configuration with a Membrane Technology and Research Inc. membrane developed through NETL support — another successful example of how NETL works with its technology partners to find synergies among its portfolio to develop transformation concepts.

“This trip provided an excellent learning experience. We saw a variety of industrial and power generation sites and capture units, which some of us had never seen in person before,” said Nicole Shamitko-Klingensmith, NETL project manager and member of the Point Source Carbon Capture Team.

“The tour of the Cane Run NGCC Generating Station was particularly beneficial for new project managers, as there are projects in the portfolio which involve testing under NGCC conditions as well as front end engineering design (FEED) studies for NGCC sites,” Shamitko-Klingensmith said. “Although we commonly see pictures and designs of such sites through presentations or publications, the site tours gave the team a better understanding of the size and complexity, as well as the cost and effort of operation.”

She said panel discussions on CO2 Capture Research and Deployment during the trip to Kentucky in between site tours were a great opportunity for professional growth that provided an awareness of different perspectives and opinions on CO2 capture efforts from capture technology developers, host sites, and investors. She noted the information gleaned will be applied by the NETL federal project managers in future project meetings, negotiations, and document reviews.