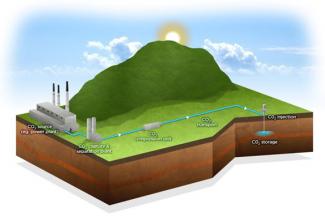 Above: Illustration of a simplified capture unit and storage facility.

CCS is the process of capturing carbon dioxide (CO2) formed during power generation and industrial processes and storing it so that it is not emitted into the atmosphere. CCS technologies have significant potential to reduce CO2 emissions in energy systems to attain the clean energy goal of net-zero emissions by 2050.

The report’s authors found that a major reason for the low risk to the supply chain is because CCS infrastructure can be supplied by components made in the U.S.

The report also concluded that a CCS industry build-out could result in creation of up to 1.8 million jobs largely in the Midwest, Appalachian and Southern States through construction, operation and maintenance of capture, pipeline and storage sites.

According to the report, “There are also numerous opportunities for research and innovation in the CCS space, including leveraging the captured carbon for additional revenue streams such as applications in liquid fuels, chemicals and plastics, and novel materials.”

The U.S. is committed to achieving a 50-52 % reduction from 2005 levels in economy-wide net greenhouse gas pollution in 2030, creating a net-zero carbon emission power sector by 2035, and achieving net zero emissions economy-wide no later than 2050.

The United States is currently a global leader in carbon capture technology and projects. As of February 2021, the United States had 13 commercial-scale carbon capture facilities, half of worldwide capacity. Many technologies are available to support the eventual 2050 CCS buildout including solvent-based capture CO2 drying, steel pipeline transportation, and geologic storage.

The reports are part of a series of studies produced in response to Executive Order 14017 “America’s Supply Chains,” which directs the Secretary of Energy to submit a report on supply chains for the energy sector industrial base. The Executive Order aims to build more secure and diverse U.S. supply chains – facilitating greater domestic production, a range of supply, built-in redundancies, adequate stockpiles, safe and secure digital networks, and a world-class American manufacturing base and workforce.
More detail on this review as well as the full series of reports, can be found at https://www.energy.gov/policy/office-policy.