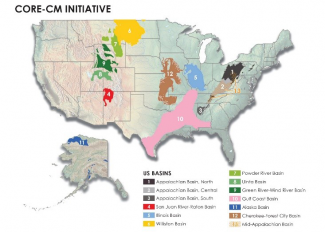 The U.S. Department of Energy (DOE) is catalyzing economic growth and job creation in energy communities across the nation through the establishment of the NETL-led Carbon Ore, Rare Earth and Critical Minerals (CORE-CM) initiative. The initiative will help to secure a domestic supply of rare earth elements (REEs) and critical Minerals (CMs), which are crucial to the manufacture of clean energy technologies that will help decarbonize the energy sector.

The CORE-CM initiative is one of the ways NETL is helping ensure that the energy communities that have powered the nation for nearly a century will not be left behind in the transition to clean energy. Instead, these same communities will now lead the United States into this new era by using their abundant carbon ore resources to produce the REEs and CMs needed to build wind turbines, solar panels, batteries, magnets and more.

DOE recently announced that 13 projects in traditionally carbon ore-producing communities across the country  were awarded a total of $19 million for research and development producing REEs and CMs from U.S. basins.  Producing these critical materials domestically will alleviate the need to rely on imported materials and minimize the potential vulnerability of supply disruptions.

“These 13 coalition teams of private industry, university, and state, local, and federal government personnel are looking at 13 basins in more than 20 states,” said NETL’s Federal Project Manager Chuck Miller, who manages three of the projects. “Many of these regions have been hard hit by declining demand for coal for power production. DOE is searching for economic opportunity for these communities to use their abundant natural resources in a new industry with good paying jobs.”

The following recipients plan to advance the extraction and recovery of REEs and CMs in the following basins (see map above):

The CORE-CM Initiative also aligns with recommendations made by the White House Interagency Working Group (IWG) on Coal and Power Plant Communities and Economic Revitalization, which identified next steps in an Initial Report to the President including partnering with local communities to ensure that the shift to a clean energy economy creates good-paying union jobs, spurs economic revitalization and supports workers. NETL Director Brian J. Anderson leads the IWG, further strengthening NETL’s commitment to realizing these goals.

“The CORE-CM Initiative has the potential to have a twofold improvement to our nation,” Miller said. “By producing REE and CM domestically, we are strengthening our national economy and security while ensuring next-generation clean energy technologies will flourish. At the same time, when we find a new economic use for a resource that has been central to regional economies for so long, it can help another generation of workers to support their families and local economies.”