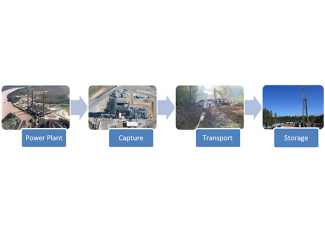 As one of seven of the Regional Carbon Sequestration Partnerships, SECARB was a $130 million program established in 2003 and managed by the Southern States Energy Board (SSEB) with the primary goals of identifying major sources of carbon emissions, characterizing the geology of a 13-state region, determining the most promising options for commercial deployment of carbon dioxide (CO2) storage technologies in the South, and validating the technology options.

“The projects undertaken during this collaboration were crucial stepping stones in building confidence in large scale CO2 storage,” said Mary Sullivan, an NETL project manager with the Lab’s Carbon Utilization and Storage Team. “As NETL supports the Administration’s goal to decarbonize the U.S. economy, the contributions of SECARB provides valuable experience upon which to build going forward.”

SECARB’s Early Test, led by the Gulf Coast Carbon Center at the Texas Bureau of Economic Geology, monitored the storage of 4,743,898 metric tons of CO2 at Denbury Onshore, LLC’s active CO2-enhanced oil recovery operation in the Cranfield oilfield.  The technical focus of this project was to document retention in the injection zone, quantify storage capacity and quantify pressure response to injection. The Early Test produced a large number of datasets and tested a variety of CO2 monitoring, verification and accounting (MVA) tools and approaches, of which some are used today.

The Anthropogenic Test featured CO2 storage in southwest Alabama near the town of Citronelle.  At the time of operation, the Anthropogenic Test was the largest demonstration of a CCUS project that integrated capture, transportation and storage. The CO2 was sourced from a newly constructed post-combustion CO2 capture facility at Alabama Power's 2,657 MW Barry Electric Generating Plant. A small amount of flue gas, equivalent to the amount produced when generating 25 MW of Electricity, was diverted from the plant to where the CO2 was captured using a process developed by Mitsubishi Heavy Industries and transported 12 miles via pipeline to the Citronelle Oilfield operated by Denbury. The team monitored the injection and storage of 114,104 metric tons of CO2 through proven and experimental MVA technologies.

These two large-scale injection tests lays the foundation for future CCUS projects. The conclusion of SECARB’s success comes on the heels of another NETL-funded endeavor with the Midwest Regional Carbon Sequestration Partnership in which scientists at Battelle conducted vital research that also helped to pave the way for commercial deployment of CCUS technologies.