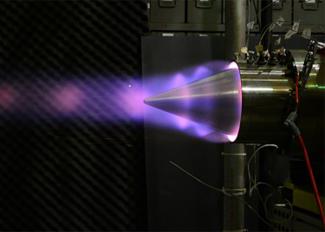 With support from partners in academia, NETL researchers have taken steps toward realizing the potential of rotating detonation combustion technology, which can offer a number of advantages over conventional internal combustion.

Internal combustion engines such as gas turbines are effective, but they suffer pressure and power output limitations. Rotating detonating engines create controlled, continuous detonation waves that rotate inside a modified gas turbine combustion chamber. This allows the engines to be able to avoid pressure losses and the subsequent decreases in efficiency that occur with conventional gas turbine engines. The rotating detonation process enables more of a fuel’s energy to be captured and utilized, resulting in higher power output, less fuel consumption, a smaller industrial footprint and reduced environmental impact.

NETL researchers have integrated an optimized, low-loss fuel-air injector and exhaust diffuser into the Rotating Detonation-Wave Combustor (RDC) in the NETL Advanced Thermal Sciences Laboratory in Morgantown, West Virginia. Computational models have suggested that the revolutionary new technology could increase efficiencies by 3-5%, which could significantly reduce fuel consumption and carbon emissions in power plants.

Additionally, due to the high flame speeds associated with detonation, RDCs operate well on high hydrogen content fuels and are less susceptible to issues combustion engines can present when used. NETL researchers are studying fundamental RDC processes and developing novel diagnostic methods to characterize RDC performance, which will further the development of this revolutionary technology, making it more attractive to private industry investors and more likely to see widespread adoption.

“This is an important development on the road to fully functional RDC applications,” said Pete Strakey, Ph.D., a scientist with NETL’s Thermal Sciences Team. “In addition to using less fuel and lowering the environmental footprint of power plants, RDC technology is highly versatile. It can be used for land-based power generation as well as propulsion in everything from ships to aircraft and spacecraft. Just as the internal combustion engine served as a cornerstone for our technological development in the past, we may well see a future driven by the RDC concept.”

With support from research partners at Purdue University, the new components have been designed and fabricated at NETL to reduce aerodynamic losses and achieve the desired pressure gain. NETL’s successful assembly and pressure testing of the reconfigured combustor represents the first of three candidate low-loss geometries to be developed and tested at NETL in the next 18 months. Low-loss geometries are designs that have a low pressure loss across the injector. Lower pressure loss across the injector translates into more pressure gain.

Collaborating with Air Force, Navy and NASA research organizations, universities, and private companies to explore this potentially transformative concept, NETL will continue to leverage the research experience of these entities with its unique modeling, experimental and diagnostic capabilities in high-pressure combustion as a representative on the National Rotating Detonation Council. The goal of the council is to coordinate research efforts regarding rotating detonation engines and further their development.