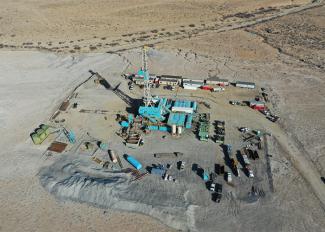 A project team supported by NETL has successfully drilled a 9,745-foot-deep stratigraphic test well in the Paradox Basin of Utah and extracted a greater-than-expected amount of whole core rock samples from the subsurface. The material will now be analyzed to better understand the region’s geology, especially the role of natural fractures, and identify optimum strategies to recover oil from the sizable Cane Creek resource play.

“It was a tremendous way to start 2021,” said John R. Duda, associate director, Technology Development Center, NETL. “This was the first time that such extensive continuous whole core rock samples were extracted from deep within the subsurface in the unconventional Cane Creek play.”

Comprehensive analyses of the cores and petrophysical logs will now begin to better characterize and understand the geology and especially the role of geomechanics in the Cane Creek petroleum system, and by extension other potential reservoirs in the Paradox Basin and other basins in the western U.S. A primary objective is to exploit natural fractures as much as possible, to minimize environmental impacts of production from this and other similar unconventional plays.

Testing will yield significant volumes of data, which can be used to develop fracture network and geomechanical models needed to predict the occurrence of natural fractures and faults, as well as forecast the effectiveness of novel stimulation approaches to recover oil from the Cane Creek resource play and others in the area.

The U.S. Geological Survey (USGS) determined mean total undiscovered oil resources within the Cane Creek interval in the Paradox Basin at 215 million barrels. The USGS also noted there is significant upside potential in other unassessed adjacent clastic zones in this emerging play.

To date, USGS estimates that only 4% (8.9 million barrels) of the total Cane Creek resource has been produced from 37 wells, 26 of which are still active producers (including 21 horizontal wells). More than 96% of this historic production is from the central Cane Creek Unit. The NETL-supported project will help determine strategies to unlock production in areas to the north.

Duda noted that drilling of the well began in December and was completed in 19 days using a modern rig and experienced crew, creating cost efficiencies. “More importantly, this work will help NETL and its partners open the door to a large domestic oil resource that can serve a critical role in maintaining America’s energy security,” Duda said.

The stratigraphic well is in a thermally mature and structurally complex region of the Paradox Basin, which may include a higher density of natural fractures. The Lab and its partners hope to devise strategies to identify and exploit these natural fractures for development that will lead to maximized production from this play and others with similar characteristics.

Completion of this stratigraphic well is part of a comprehensive U.S. Department of Energy project scheduled to advance from the purpose of characterizing the complex subsurface environment of the Paradox Basin to the development of optimized horizontal well placement.

Strategic drilling and tactical stimulation approaches developed as part of this project will be tested in at least one horizontal well in the Paradox Basin. The 4½-year project, scheduled for completion in March 2024, received $8 million in federal funding and approximately $3 million from project partners. A 3D seismic study of the project area previously completed by Zephyr will be employed to complement the effort.