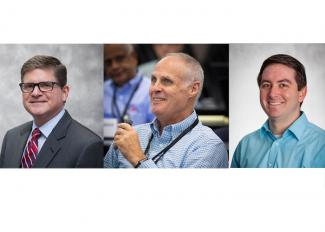 Several NETL researchers recently were named recipients of the Secretary’s Honor Awards, the highest internal, non-monetary recognition that U.S. Department of Energy (DOE) employees and contractors can receive for their service and contributions to the department’s mission and to the nation.

A total of 32 Honor Awards were announced. NETL’s Christopher Matranga received the Secretary of Energy’s Excellence Award. Matranga’s work has brought national and international recognition to NETL by advancing technologies to find new and improved applications for domestic coal that will strengthen the U.S. economy, improve the environment and promote energy independence for America.

Two teams that included NETL researchers received the Secretary of Energy Achievement Award. Those researchers were Randy Gentry, a member of the Science and Technology Risk Matrix Team, and Greg Hackett and Daniel Maloney, members of the Integrated Energy Systems Team.

The Science and Technology Risk Matrix Team was recognized for its exceptional contributions to security for reducing the risk of foreign influence and foreign actors to the DOE national laboratory complex. This enterprise-wide effort protected the national security of the U.S. while maintaining and enhancing its world-leading science enterprise.