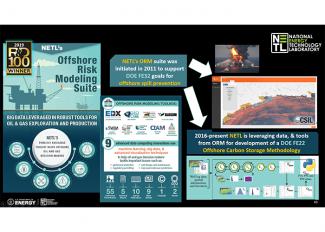 Scientists from NETL were invited by book editors from NASA’s Jet Propulsion Laboratory (JPL) and Honeybee Robotics to include a chapter focusing on a portion of its research program related to Environmental Drilling as part of the recently released book “Advances in Terrestrial Drilling: Ground, Ice, and Underwater.”

The book details the latest drilling and excavation principles and processes for terrestrial environments. Many years of research by the U.S. Department of Energy (DOE) in this area is detailed, including NETL’s offshore research, as the focus of the book’s seventh chapter, “Environmental Drilling / Sampling and Offshore Modeling Systems.”

The chapter features NETL’s Offshore Risk Modeling (ORM) suite, which is a product of six years of research to harness Big Data capabilities that comprises eight innovative science- and data-driven computational tools and models designed to predict, prepare for and prevent future oil spills. ORM compiles data- and science-driven tools and crosscuts multiple offshore environments to offer a novel approach for more informed decision-making that spans the full engineered and natural offshore system from the subsurface, through the water column and to the coast.

During the past six years, ORM has been validated and adopted for use by domestic and international regulators, researchers, academia and industry. The suite has been used to evaluate and reduce risks associated with offshore hydrocarbon operations. Uses include analyses and predictions of subsurface geologic properties such as pressure, temperature, porosity and permeability in offshore regions of low data density and resolution. Many federal agencies have expressed an interest in applying ORM to predict the fate and transport of offshore oil spills and blowouts from a range of natural and anthropogenic sources.

ORM builds upon lessons learned from anthropogenic and natural disasters, including Hurricanes Rita and Katrina and the 2010 Deepwater Horizon oil spill in the Gulf of Mexico, which released more than 130 million gallons of oil over 87 days. Off-the-shelf tools available a decade ago were inadequate for identifying risk and predicting behaviors of engineered or natural offshore systems.

“When we started work on ORM, the goal was to leverage the power of big data and geodata science to prevent future offshore spill events, from small to big,” Kelly Rose Ph.D., NETL geodata scientist and principal investigator of ORM project, said. “Now we’re finding all kinds of uses for the suite such as the harvesting of rare earth elements or evaluating response preparedness and supporting efficient operational decisions at work sites, just to name a few examples.”

Drilling is going to continue to be essential to an improved understanding of the subsurface. The advancement of drilling technologies will likely still be needed to enable continued resource development and environmental sustainability. Going forward, the world’s industries face new challenges of drilling more complex wells to greater depths and operating at hard to access locations and in extreme temperatures as well as autonomous drilling in hazardous environments and/or environmentally sensitive areas. NETL has shown that it’s uniquely equipped and qualified to help industry navigate these challenges.