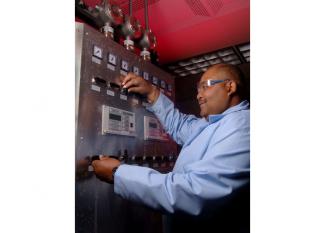 In his long career at NETL, McMahan Gray has experienced more than a few successes.

For example, the award-winning research chemist has made valuable contributions to remove carbon from industrial emissions and extract rare earth elements (REEs) from coal byproducts, wastewater and even acid mine drainage.

Another ground-breaking contribution may be just around the corner. As part of an ongoing research effort, Gray serves on an NETL team that’s writing a new chapter in the long productive history of coal that may revolutionize how the mineral is used in the future.

The team has found that rather than combust coal to produce energy, it can be used in new ways to fuel a transformation in carbon-based, high-tech manufacturing to produce safer cars, faster computers, stronger homes, bridges and highways, and even life-saving biosensors to confirm the presence of disease in the human body.

“We were looking for a rebirth in how coal can be used when we began our project,” said Gray, who has worked at the Lab for 34 years. “I think the rebirth we will see is going to produce sophisticated new uses for coal that have absolutely nothing to do with burning it to produce electricity.”

NETL’s low-cost coal-to-graphene, or C2G, manufacturing process will not only generate a superior material to produce high-value products; it also will create new environmentally friendly uses for one of the nation’s greatest resources — its abundant reserves of coal.

According to Gray, it takes a solid team effort to achieve success. “Teamwork, the leadership of an excellent principal investigation (Matranga) and the outstanding work of my colleagues have enabled us to develop this process so coal can be used in new and innovative ways,” Gray said.

Discovered in 2004, graphene is only one atomic layer thick, but it’s 100 times stronger than construction steel and 1.6 times more electrically conductive than copper electrical wire. Graphene is a form of carbon. Both graphene and carbon possess the same atoms, but they are arranged in different ways, giving each material its own unique properties. For graphene, those differences produce extraordinary strength.

However, the high cost of existing supplies of graphene have limited its use. “NETL’s technology reduces the cost of manufacturing graphene by up to tenfold while producing a significantly higher-quality material than what is currently available on the market,” Gray said.

In the future, the team envisions using graphene to build lighter and stronger cars. Gray believes it also can be used to create advanced lightweight body armor for U.S. troops.

Because graphene is one of the lightest, strongest and thinnest materials ever discovered, it makes an ideal additive to improve the mechanical properties and durability of cement and produce battery and electrode materials, 3D printing composites, water- and stain- resistant textiles, catalyst materials and supports, and other items.

NETL also has produced graphene quantum dots — small fluorescent nanoparticles with sheet-like structures — and sent them to the University of Illinois at Urbana-Champaign where they are used to fabricate an advanced type of computer memory chip called a memristor. Recent testing has shown that memristors made with NETL graphene have outperformed those made with conventional materials.

In addition, the project team is collaborating with Ramaco Carbon, a Wyoming-based coal technology company, to take advantage of graphene’s superb electrical conductivity to develop new biosensor products that can quickly confirm the presence of Lyme disease, Zika virus or the amount of medication in a blood sample.

Gray is no stranger to advancing ground-breaking projects.

He led NETL researchers who developed the basic immobilized amine sorbent (BIAS) process to capture carbon dioxide (CO2) from coal-burning power plants. Recognizing that the BIAS approach could do more than capture CO2 from coal combustion, Gray has worked to adapt the technology of sorbents, which are designed to absorb targeted chemical compounds, to remove heavy metals, including lead, from public water supplies and recover valuable rare earth elements (REEs) from acid mine discharges and other sources.

REEs, which are needed to produce high-performance optics and lasers, as well as powerful magnets, superconductors, solar panels and valuable consumers products such as smart phones and computer hard drives, are abundant in nature but are often found in low concentrations and are challenging to extract.

“I call it a ‘double hit,’ which sometimes happens when research on one project produces a positive finding to benefit another project,” said Gray, who received a prestigious R&D 100 award in 2012 for the BIAS technology’s carbon capture application.

He has also received the Hugh Guthrie Award for Innovation as one of NETL’s leading scientists. In 2018, he was awarded a Gold Medal for “Outstanding Contribution to Science (Non-Medical)” from the Federal Executive Board for Excellence in the Government.

The Chemistry Department at the University of Pittsburgh has announced it will present Gray with its 2020 Distinguished Alumni Award for his work advancing innovative technologies while serving as a mentor who has inspired hundreds of students and colleagues.

“The molecular structure behind coal is amazing. There’s really so much more we can do with coal,” he added.