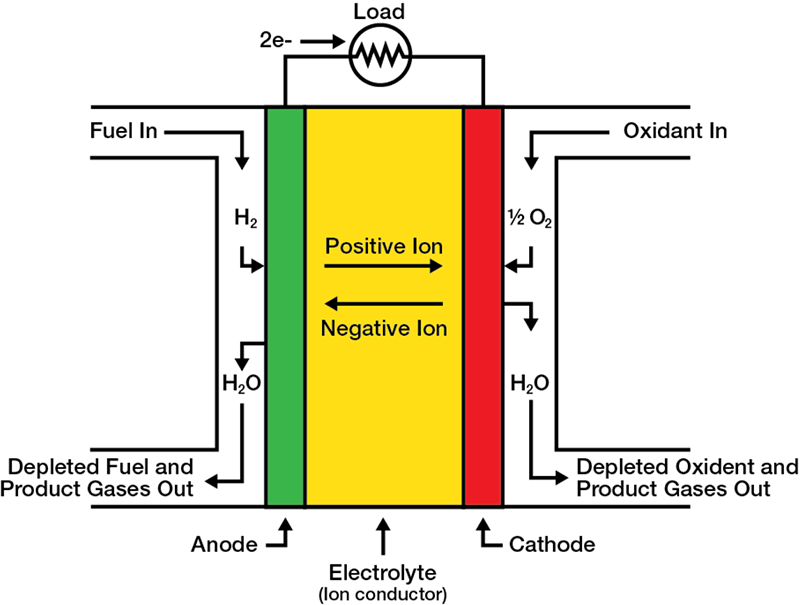 The basic structure of an SOFC consists of a solid electrolyte (usually a ceramic) positioned between an anode and a cathode. Fuel is delivered to the anode and oxidant, typically air, is delivered to the cathode. The electrodes are solid porous structures that allow the fuel and air to diffuse to the electrolyte and the products of the electrochemical reaction on the anode side to diffuse away from the electrolyte. The electrolyte conducts the oxygen ions formed by the electrochemical reduction of molecular oxygen from the cathode side to the anode side of the SOFC. Fuel diffuses through the anode to the anode/electrolyte interface. Here it reacts catalytically with the oxygen ions, releasing electrons that are transported through an external circuit, producing electricity. Individual cells are linked with a metallic interconnect in electrical series to increase voltage and power and can be stacked to achieve an optimal stack size. A number of stacks can be arrayed within an enclosure to form an SOFC module. Single or multiple modules may be aggregated and integrated with subsystems to deliver air and fuel, to recover heat, and to convert the generated electricity from direct current (DC) to alternating current (AC), forming an SOFC power system.

The basic structure and operating principles of a SOEC are exactly the same as those of a SOFC, which are described above. However, in terms of operation, a SOEC is essentially the reverse of that of a SOFC, where instead of using hydrogen to produce electricity, a SOEC utilizes electricity to produce hydrogen.