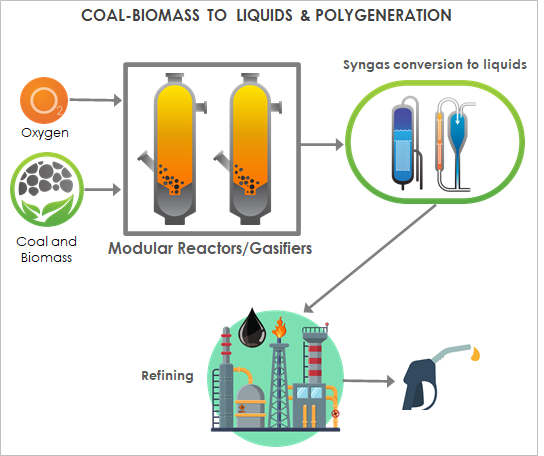 Philosophy
Technology for coal to liquids is well-established, mainly by indirect coal liquefaction based on gasifying coal to produce syngas, which is a feedstock for Fischer-Tropsch (F-T) synthesis to make liquid hydrocarbons which can be refined into high-value products such as liquid fuels, motor oils, and waxes. Syngas can also be made into methanol, itself a fuel and a feedstock for gasoline production, plus a wide range of other chemicals and products.
Considering the great extent and distribution of domestic coal reserves in the United States, routes to synthesis of liquid fuels from coal add substantial diversity in transportation fuel sources and create additional capacity for fuels production, thereby increasing energy security and stability in the country. Converting inexpensive coal to valuable liquid fuels creates economic opportunities/options given favorable market conditions. However, these coal to fuels routes must ultimately compete with conventional technology for liquid fuels (mainly produced from petroleum) in terms of both cost and emissions, with greenhouse gas emissions increasingly of concern.
Research and development of technology to increase the efficiency of modular coal conversion to fuels while reducing costs and minimizing greenhouse gas emissions will create market niches for domestic coal use as well as improve local economies and diversify and strengthen U.S. industry. Beyond the United States, innovative fuels production technology could be exported to countries with low domestic oil supplies, leading to more stable global oil pricing.

Strategy
NETL has previously pursued technological development of cost-competitive production of coal-based ultra-clean, high-value liquid transportation fuels (gasoline, diesel/jet fuel) as drop-in fuels or refinery feedstock. This R&D focus was central in the NETL-DOD/Air Force collaboration projects for development of modular technology and/or systems for coal or coal-biomass to jet fuel production with competitive carbon footprint or greenhouse gas emissions to conventional jet fuel production from petroleum. In general, it was found in techno-economic analyses that coal-based conversion (in most cases by gasification followed by F-T conversion of the syngas) would allow petroleum-competitive carbon footprint by suitable combinations of coal/biomass use or other carbon reduction process approaches.
Future work should continue to pursue innovative technology in any of the process steps for coal-biomass to liquids (gasification, syngas cleanup and processing, syngas conversion to liquid hydrocarbons), especially for modular systems which might be deployed at reasonable investment cost in favorable locales or markets.
There is another special opportunity for gasification at military bases for liquid fuels production. Importing fuels to military bases often involves excessively high costs and risks. In some cases, locally available coal (plus opportunity feedstocks like municipal solid waste and biomass) might be converted in gasification & syngas conversion processes to synthesize these fuels on-site. Crucially, modular gasification units would be required for their deployability and portability, and for their ability to efficiently operate at smaller scales so as to match fuel demand at the military bases. There is significant scope of R&D which might continue to advance technology of modular systems to meet this particular need.

Projects
Currently there are no active projects in this Key Technology area.

White Papers
“Overview of Coal-to-Liquids: A Historical Perspective”: This paper reviews technology for synthesizing liquid fuels from coal, the history of development in the 20th century up to early 21st century including Department of Energy and National Energy Technology Laboratory-supported work, its costs and environmental impacts, and current challenges and opportunities with particular reference to the United States.

Other key technologies within Gasification Systems include the following: